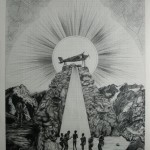 The work of Ryan Leigh, Sam Knowles and Nick Bailey joins a current phenomenon in contemporary art that is marked by its investigation into the means and processes that comprised scientific and theoretical thought in a time before the disintegration of the meta-theory.
Base Metal sees each artist rationalizing his interest and rooting his approach in logic, while using the tools of science and alchemy (or the ideas that frequently frame them) as a means of expression. Gold leaf interventions, everyday and scientific apparatus, and highly finished ‘text-book’ drawings on graph paper that have been fused with contemporary techniques such as digital manipulation dominate: and while the scale of the works may sometimes be small, the idea behind is strong and clearly articulated. This exhibition refers not only to man’s need to ‘believe’ in something greater, but also raises questions in regard to man’s vision of himself and his role within the world, while simultaneously offering little solace in the form of a theory or religion to fall back on.

Ryan Leigh (b.1987) is interested in explanations of physical reality and man’s need for an all-encompassing ‘theory of everything’. Works such as Cargo Cult (2010) are frequently executed in lead pencil on graph paper. They are intensely detailed, and predominantly question differing means of communication, for instance the ‘documentary’ drawing and how it has been used in scientific or religious contexts to express a given truth. By splicing and cutting the diagrammatic image or juxtaposing and integrating it with other images, photographs or drawings from a different era or series of symbols, Leigh’s work both comments on the relationships within society’s different belief systems, and highlights the futility of the search for an objective truth.

Sam Knowles’ (b.1983) practice deals with metaphysical concerns, and the notion that the world – and man’s existence in it – can be explained in one ‘grand’ theory. It is the gaps left behind by the departure of the meta-theory that form the starting points for many of his works, which are informed by game playing, structures and systems of knowledge. The works exhibited in Base Metal take the form of gold leaf interventions executed on pages taken from old hardback scientific or historical tomes: while Knowles’ input is tied-down by the shape and size of the surfaces on which he is drawing, his transformation of the pages creates a new series of values and meanings.

The sculptures and installations of Nick Bailey (b.1986) play gently on the viewer’s sense of curiosity, softly subverting one’s sense of what is ‘normal’ within everyday objects. Most frequently made from everyday materials such as buttons, handles or hammers, Bailey’s work draws its audience into a questioning of their conventional role in relation with the object set before them. By compelling the viewer to consider on a personal level whether or not it is actually acceptable to physically engage with the work, Bailey’s work inhabits a realm of mild disappointment and anticlimax wherein, upon coming to an understanding of what the physical form of the artwork offers, one is reminded that at best this still only amounts to physical contact with an object or objects.

Romain Bernini Debuts His Work in the U.S. at Priska C....