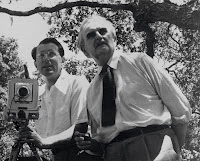 Visual Acoustics, directed by Eric Bricker, is a reflective documentary with beautiful imagery on the life and work of Julius Shulman, the eminent architectural photographer of modernist homes and buildings. Most of the 84 minute film, which opened on October 9th in New York City and October 16th in Los Angeles, takes place in LA with Shulman visiting homes made famous by his photographs taken at the height of his career from the 1940’s through the 1960’s. While the film is narrated by Dustin Hoffman, much of the story is told by Shulman himself, who passed away July 15th of this year at the age of 98. Shulman comes forth as a determined and energetic individual, and commentary by architecture historians and influential figures from the art and design worlds, such as Ed Ruscha and Tom Ford, confirm the profound impact his photographs (which are primarily black and white) have had on the way people saw and continue to see modern architecture. 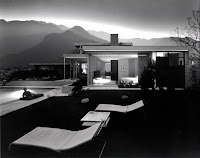 Perhaps one of the most valuable anecdotes in the film comes from Shulman’s description of how he found his way into architecture photography. His family moved to Los Angles when he was 10, and he went on to attend college first at UCLA and then at the University of California, Berkeley, where after several years spent mostly auditing classes on subjects as diverse as geology and philosophy, he decided to return to Los Angeles without obtaining a diploma. Shulman explains that he knew whatever he was going to do with his life was back in LA. There, he continued to use the Kodak Vest Pocket Camera given to him for his twenty-third birthday along with skills taken from the single photography course he took in high school. 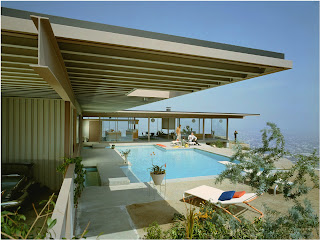 Stahl House, Photogrpahed by Julius Shulman 1960, from VISUAL ACOUSTICS an Art House film release, 2009, copyright The J. Paul Getty Trust
In a scene at the home office of his Raphael Soriano designed house in Los Angeles, Shulman reflects on the picture that started him down the path to photographing modern architecture. In 1936 a friend asked him to photograph the then unfinished Kun house designed by Richard Neutra. Shulman recounts that when Neutra saw the photograph taken with this Kodak Vest Pocket camera, he was so impressed that he quickly gave Shulman other projects. Through Neutra, Shulman was able to meet other influential modern architects, such as Rudolph Schindler, Pierre Koenig, and Frank Lloyd Wright, all of whose structures would become famous in part through Schulman’s iconic images. Shulman did eventually graduate to a professional viewfinder camera, though he quickly shied away from using a light meter and flood lights to give his compositions a more naturally alluring look.

Nostalgia is ubiquitous in the film, as Shulman recalls houses he once photographed only to revisit and find additions or new buildings obstructing the views his camera once so beautifully captured. Modern a

rchitecture, as presented by Shulman and his camera, was an entity in itself–an explosion of positive ideas and hope for the future. Shulman helped to communicate many ideas associated with the modern
architecture movement in the way he was able to frame buildings in the most ideal way possible, sometimes adding human figures, his own furniture, and bits of vegetation into his compositions, all with seemingly perfect perspective.
(above: Julius Shulman, from VISUAL ACOUSTICS, an Arthouse Films release 2009. Copyright Michelle Oliver. Courtesy of Arthouse Films)