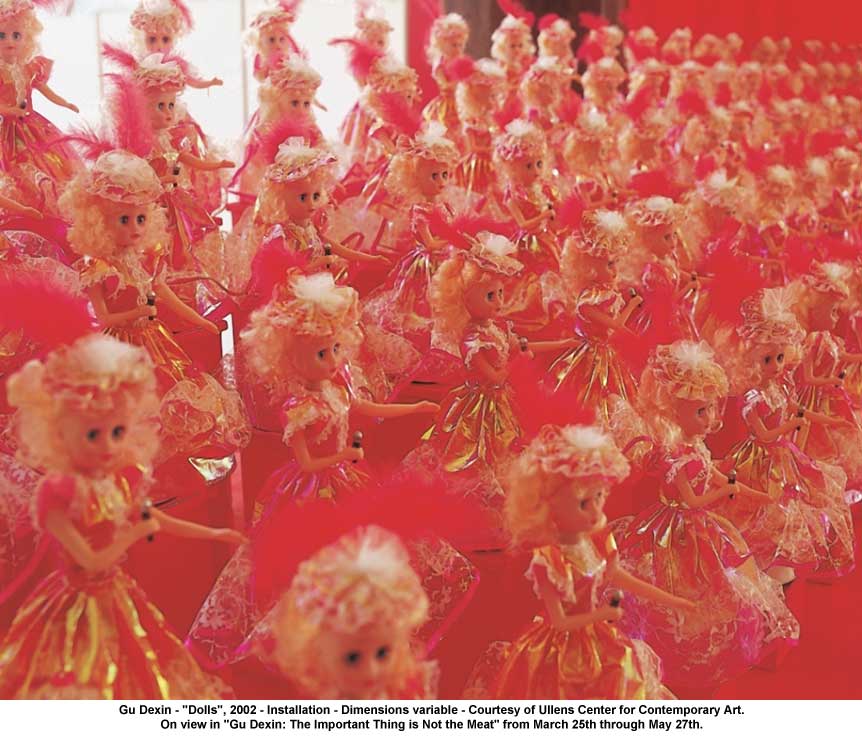 Beijing.- The Ullens Center for Contemporary Art (UCCA) will present a major retrospective of work by Gu Dexin featuring more than 280 artworks and spanning three decades of the artist’s vast output. Entitled “Gu Dexin: The Important Thing is Not the Meat”, the exhibition will be on view from Sunday March 25th through May 27th, and marks the first comprehensive attempt to examine one of China’s most original artistic voices. Gu Dexin was one of the pioneering presences of the generation that began making contemporary art during the 1980s. In 1989, he was one of the three Chinese artists to show in “Magiciens de la Terre” at the Pompidou Centre, the first time art from contemporary China had been inserted into a global context. Throughout the 1990s and into the 2000s he continued to be a prominent participant in the wave of “China shows” that first brought contemporary Chinese art to an international public.

The exhibition takes its title from a 2003 article by the artist and critic Qiu Zhijie, the title of which was itself a response to the 1996 article “The Important Thing is Not the Art” by the curator Li Xianting. In this article, Li wrote on behalf of a then-marginalized group of painters and sculptors (including Gu) whose significance he saw in terms as much social as aesthetic. Qiu wrote in defense of his own later generation, the “Post-Sense Sensibility” artists, a group which provoked public ire and official censure with their gory experiments involving animal and even human flesh around the turn of the 21st century. This title, like this exhibition, positions Gu as the missing link between these two generations and their respective concerns.

Tracing the span of the artist’s career, from his amateur paintings in the late 1970s through to his climactic final textual installation piece of 2009, the exhibition presents Gu Dexin’s work as an alternative history of the development of contemporary art in China. His early paintings, watercolors, and embroideries open up a fantastic yet dystopian worlds of creatures, while the later visceral and performative installations of fruit, meat, and plastic, foreshadow wider debates over acceptable forms and materials within the Chinese art world and the emerging international community around it. Gu Dexin refused to work with the obviously Chinese symbols and elements favoured by his contemporaries. In fact, he disliked the idea of imposing a reading on his viewers so much that he titled his works first with serial numbers, and later simply with the date on which they were completed. His ultimate decision to end his career and return to “normal” life in the Beijing residential compound where he grew up has led to his practice being read by many commentators as more of a protest to society than a rejection of art. The exhibition has been conceived and curated by new UCCA Director Philip Tinari. It includes a special loan of 80 artworks from the collection of the Guy and Myriam Ullens Foundation alongside works from the Sigg Collection, DSL Collection, Guan Yi Collection, Yuz Foundation, and Tim & Ellen Kim Van Housen Collection and several other lenders, including many works that have not been seen since their original appearances at biennials and underground exhibitions. The exhibition will be accompanied by a major monograph, which will be published by UCCA’s new publishing venture UCCA Books. It will be launched in early summer and will include documentation of a major conference that will accompany the opening on March 25th.

The Ullens Center for Contemporary Art is a not-for-profit art center in Beijing, located at the heart of the 798 Art District. As a platform for contemporary art linking China and the world, UCCA offers around 15 exhibitions a year and over 500 public programmes including art talks, film screenings, performances, workshops and public festivals. The international center maintains a special focus on recent developments and historical movements in Chinese contemporary culture, showcasing the latest in art and design and fostering international exchange. This year, UCCA are producing major exhibitions of established and emerging Chinese artists, under the curatorial vision of the new Director, Philip Tinari. These include Gu Dexin, Yung Ho Chang, Yun-Fei Ji, Song Kun, Wang Mai, Jennifer Wen Ma, and Kan Xuan. The center is currently hosting an exhibition of limited edition works by artists produced by the art journal Parkett. The show, titled “Inside a Book a House of Gold,” includes 212 works by 192 leading international artists including John Baldessari, Urs Fischer, Andreas Gursky, Christian Marclay, Richard Prince, Gerhardt Richter, Ed Ruscha and Cindy Sherman. The center will stage Indian Highway this summer, marking the first time a major touring exhibition is mounted at UCCA, as well as the largest exhibition of Indian art in China to date. Fall shows with artists including the Japanese sculptor Teppei Kaneuji and the first ever exhibition of Marcel Duchamp in China round out an international programme. Visit the center’s website at … http://www.ucca.org.cn

Wayne Thiebaud ~ Seventy Years of Painting at the San Jose...