The Winter 2010 issue of MODERN features a story on the two monumental sculptures-cum-buildings that André Bloc, an artist, architect, and magazine editor, built in the 1960s in the garden of his home in the Parisian suburb of Meudon. As breathtaking as the structures are—one is a tall, spindly brick tower with stairways leading to parapets that afford sweeping vistas of the city; the other, built of whitewashed brick, resembles an enormous chalk boulder that has been carved by wind and rain—two black-and-white movie stills that accompany the article point to an intriguing sidelight to Bloc’s work. 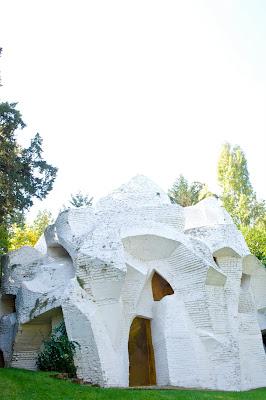 The white-painted structure is hollow and was used as the set for the opening scenes of William Klein’s 1966 film “Qui êtes-vous, Polly Maggoo?”—to our eyes, one of the most memorable sequences in cinema. Born in New York in 1928, Klein studied painting and sculpture at the Sorbonne, developed a name in the 1950s as a street photographer whose images had a bold kinetic sensibility, and later that decade spent several years as a fashion photographer for Vogue. 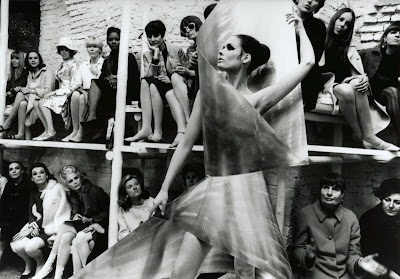 When Klein turned to film-making, the latter experience must have provided much grist for “Polly Magoo”—a dark satire on the world of couture. The link below will take you to a clip of the movie’s six-minute start. Haughty buyers and editors—mystified by their surroundings—enter Bloc’s structure and takes their seats on bleachers, while meanwhile backstage models are literally bolted into ridiculous sheet metal “dresses.” You won’t forget the sight.

Valencian Institute for Modern Art exhibition opens with the work of...