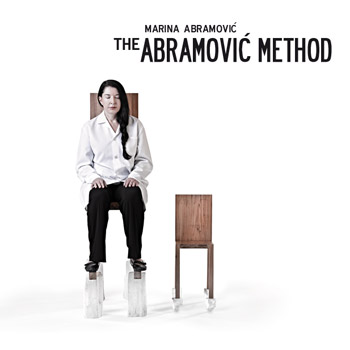 www.theabramovicmethod.it
The PAC in Milan is the venue chosen by Marina Abramović to host her eagerly awaited new work The Abramović Method—the first after the major retrospective of 2010 at the MoMA, New York—from 21 March to 10 June 2012.

Promoted by the Milan Department of Culture, Fashion and Design and jointly produced by the PAC Padiglione d’Arte Contemporanea and 24 ORE Cultura–Gruppo 24 ORE, the event is curated by Diego Sileo and Eugenio Viola.

The Abramović Method is born out of reflections developed by Marina Abramović on the basis of her last three performances, The House With the Ocean View (2002), Seven Easy Pieces (2005) and The Artist is Present (2010), experiences that have left a deep imprint on her perception of her work in relation to the public.

It will thus be the public, guided and prompted by the artist, that experiences her “interactive installations” in The Abramović Method, produced with the support of Rottapharm|Madaus. These works cast different mineral embedded—quartz, amethyst, turmaline—with which the public will have the opportunity to interact, standing, sitting or lying down. A physical and mental pathway that transforms the spaces of the PAC into an experience made up of darkness and light, absence and presence, and altered perceptions of space and time.

In order to emphasize the ambivalent role of observer and observed, actor and spectator, Marina Abramović has chosen to put the public to the test also in the apparently simple action of observation at a distance, providing a series of telescopes, provided by AURIGA, for visitors to look at the macro and micro point of views those who decide to tackle the interactive installations.

Visitors will be helped to attain a deeper understanding of the Abramović method by a selection of previous works. From Dozing Consciousness (1997) to Homage to Saint Therese (2009), her works are based on the same principles and the same untiring pursuit of an “energetic” expansion of perception capable of combining age-old wisdom and traditions with contemporary reality. A monumental installation, proposed for the first time in Europe, will rebuild The Artist is Present performed at MoMA (2010), welcoming the visitors and introducing the scenario of the Abramović Method.

In the exhibition will be projected an estract of “MARINA ABRAMOVIĆ – THE ARTIST IS PRESENT” directed by Matthew Akers, produced by Show of Force for HBO in co-production with AVRO Television and in collaboration with GA&A Productions and in Italy distributed by GA&A Productions and Feltrinelli Real Cinema.

Also “The Abramović Method” will be the object of a film-documentary directed by Giada Colagrande and produced with the support of Fondazione Furla.

The catalogue, edited by Diego Sileo and Eugenio Viola, will be published by 24 ORE Cultura–Gruppo 24 ORE with texts of the two curators, Renato Barilli, Achille Bonito Oliva, Germano Celant, Gillo Dorfles, Antonello Tolve, Angela Vettese and Neville Wakefield. The book will be published in two volumes. The first, Italian Works, will feature – for the first time – all the performances staged in Italy by Marina Abramović and the second will instead focus exclusively on the entire process leading up to the forging of the “Abramović Method”.

The exhibitions of the PAC are held on an annual basis with support from TOD’S.

Accademia di Brera, the official university of the exhibition, have selected a group of students that will be educated by Marina and will guided the public as keepers of the Abramović Method.

Other special events in Milan for “The Abramović Method”:

Tuesday 20 March, in Galleria Lia Rumma, Marina Abramović opens a second exhibition “With Eyes Closed I See Happiness”, another key to the reading of the “Method”.

Wednesday 21 March, at Dal Verme Theater the lecture by Marina Abramović “The past, future and present of performance art”

Thursday 22 March, at the Apollo spazioCinema the film “Marina Abramović. The Artist is Present”

At Your Service – Art and Labour at Technisches Museum Wien‏