Is there anything left to say about George Nakashima and his furniture that hasn’t already been said in his own book (The Soul of a Tree) and in books about him (Nature, Form & Spirit) and in numerous magazine articles and films (Craft in America) and museum catalogs (George Nakashima and the Modernist Moment)? 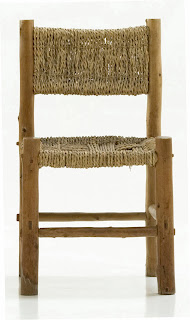 Chair for St. Paul’s Church, Karuizawa, Japan, made of peeled cyptomeria branches and sea-grass and made in 1936

As it turns out, quite a bit, as clearly evidenced by the current show of Nakashima’s work at Robert Aibel’s Moderne Gallery in Philadelphia. Titled “Early Furniture by George Nakashima, 1936–1956: The Architect Designs,” the exhibit features 55 vintage works (some on loan from museums, private collectors, dealers, and the Nakashima family) that are intelligently juxtaposed with 13 later works, providing a rich overview of the evolution of Nakashima’s design thinking.

For example, there’s the diminutive grass-seated chair that Nakashima made in 1936 for St. Paul’s church in Karuizawa, Japan. With its straight back posts basically made simply from tree limbs, bark still intact, it looks like it just emerged from the forest. That chair contrasts nicely with Nakashima’s more familiar Grass-Seated Chairs (one an early commission for René d’Harnoncourt, former director of MoMA) and with a chronological progression of Straight Chairs in which style, details, and proportions morph smoothly from the past to the present, from hand-crafted to Knoll mass production. 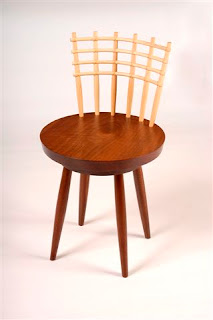 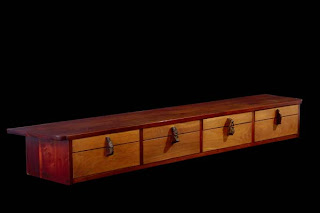 Left: Ligne Revolving Chair, a new piece from the Shoki line by Mira Nakashima, based on earlier drawings by her father, George. Right: Wall-hung walnut chest with burl pulls, built in 1951. Photo by Michael J. Joniec

When George’s daughter, a designer in her own right, Mira Nakashima, was searching through the studio in preparation to donating its archives to the James A. Michener Museum of Art in Doylestown, PA, she came across her father’s drawings for pieces that were never produced. So, to add to the historical perspective, Mira has created a new line of desks, tables, and chairs called Shoki (“Early Years”) that is based on those drawings, which themselves have been blown up and artfully hung on the gallery walls by show designer Gruber Design Associates.

This is an exhibition with coherence and excitement as well as pure scholarly, educational value. Note, too, that 50 or so of the pieces in the show are available for purchase, one of which—a 96-inch long walnut hanging shelf with four double drawers and burl handles—is quite spectacular and arguably wins honors for best in show.