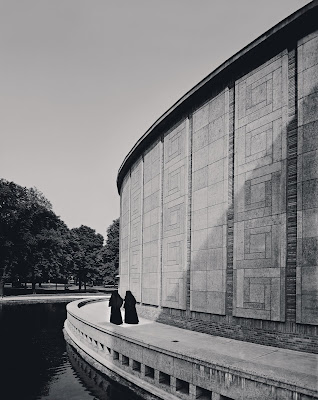 A tribute to the art and architecture of Robert Damora

“It hit me like a ton of bricks.” That is a funny way to describe one’s response to an architectural exhibition, but that unintentional pun is how Robert Damora often spoke of his visceral response to Philip Johnson’s “Modern Architecture: An International Exhibition” at the Museum of Modern Art in New York.
Right: Damora’s striking 1941 image of the Kleinhans Music Hall in Buffalo, New York.

Damora was a twenty-year-old photographic assistant, and a night student at the New York University School of Architecture, when he visited that watershed 1932 exhibition, which inaugurated MoMA’s Department of Architecture. Seven years later he was back, shooting MoMA’s newly built West 53rd Street icon of modernism for The Architectural Forum, the leading journal of the day. Damora was well on his way to becoming the professional Walter Gropius hailed as “the best photographer of architecture in this country.”

Damora hit his stride in that golden post-war moment when both modern architecture and the notion of photography as a true art form were at last ensconced in the American cultural canon. This historic conjunction provided fertile ground for architectural photography—previously considered by those in and out of the field as a matter of documentation—to rise to the level of art. Names such as Ezra Stoller and Julius Shulman might become better known, but Damora was deeply admired by peers such as Balthazar Korab—architect Eero Saarinen’s lensman of choice—who called him “the dean of American architectural photography.”
Graduating from Yale’s architectural school in 1953, Damora emerged with a fervent belief in the possibilities of modern architecture. During the 1950s he headed a project for Universal Atlas Cements (part of U.S. Steel) called “Seeds for Architecture,” which commissioned such top modernists as Gropius, Marcel Breuer, and Louis Kahn to design exploratory projects using 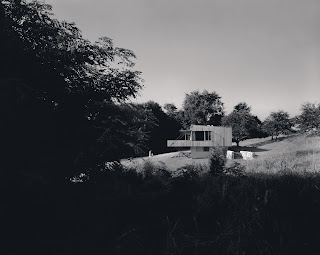 affordable concrete. Damora’s own built projectsreflecteddemocratic ideals, notably his modular Cape House, Architectural Record’s “House of the Year” of 1962, a model home constructed from six pre-fabricated mass-produced components, which could be erected in two days in a variety of forms.

Left: Damora’s camera peers through the undergrowth at the Marcel Breuer House in New Canaan, Connecticut, in this 1948 shot.

But Damora’s most enduring legacy will surely be the work he undertook with his 8-x-10-inch view camera. Familiarity with modern architecture’s tenets convinced Damora that a revolutionary type of structure required new approaches to photographic representation. “Modern architecture is concerned with the volume of buildings rather than the façade that captivated Renaissance architecture,” he once said. He strove to develop what he called “volumetric” photography, and achieved that goal with technical virtuosity as well as a natural talent for the composition of images.

We can see the radical departure Damora made from static façade photography in a 1948 photograph he made of Marcel Breuer’s house in New Canaan, Connecticut. Though the house is relatively small in the frame, the image

possesses a sense of expansive space thanks to a composition that moves us through a foreground of dark thicket to the bright, cleared rise on which the house perches. The effect is almost anthropological—as if Damora crept up upon this exotic new breed of dwelling, with its dramatic cantilevered deck, while exploring the pastoral New England woods.

Right: His 1977 photo of the Hancock Building in Boston
gives the edifice an air of power and drama.

Damora’s 1941 photograph of Eliel and Eero Saarinen’s Kleinhans Music Hall in Buffalo is another example of his precise and theatrical compositional sense. Two nuns traverse the center of the frame, the twin black columns of their habits echoed in the vertical panels on the Saarinens’ curvilinear structure, as well as in the dark tree trunks in the surrounding Frederick Law Olmsted–designed park. Though the visual harmony and evocations of austerity and spirituality seem coincidental, Damora had a clear sense of purpose (not to mention perseverance) when creating this image. The reflecting pool was drained when he arrived, and he had it filled. The nuns, who happened to be nearby, were recruited to stroll the walkway many times before Damora took a shot in which their forms just clear the diagonal shadow in the right corner of the frame. 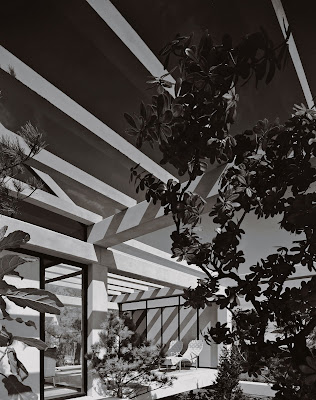 Above: Damora created a lush, complex composition of diagonals, shadows, and
flora in this 1962 image of a house of his own design, built on Cape Cod.

Robert Damora died last year at the age of 97, having recently enjoyed the launch of a Yale School of Architecture retrospective exhibition, “Robert Damora: 70 Years of Total Architecture.” They were indeed 70 years well spent, with consuming twin passions for architecture and photography, and a singular optimism in their potential to elevate the human spirit.

For more information on Robert Damora and the Booth House, go to www.robertdamora.com.

Japanese Fascination with the West is Explored in Exhibition of 19th-Century...