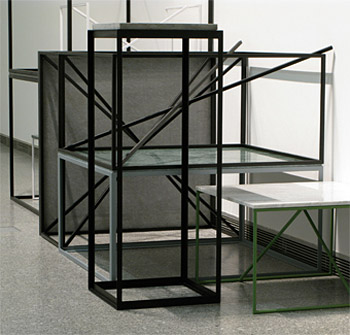 The MACBA Collection, which includes works owned by Catalan, Spanish and European institutions, both public and private, provides MACBA with a guiding thematic thread; it operates as both genetic code and test bench in the Museum project. The goal behind it is to build up an expanding public Collection that can be organised in different ways according to the needs of narrative projects. This is not merely inert, material heritage; rather, the intention is to make the Collection a motor to generate ideas.

From the qualitative standpoint, the MACBA Collection is also expanding, as it focuses on a concept of artistic practice that goes beyond the visual arts. For this is not a finished collection that exhaustively covers a particular period in recent history; rather, it is a living body that finds nourishment in the debates and questions that the present generates. From the present to the past, artists from different generations and backgrounds are brought together here in thematic environments that eschew linear chronology.

This new presentation of the MACBA Collection takes as its starting-point the thesis that the aesthetic eruption of modernity in our cultural context began in the 1950s, rather than the first half of the 20th century. From those days, and right up to the 1980s, artistic practice should be considered as practically indistinguishable from architecture or design. The presentation seeks particularly to illustrate how a new aesthetic came into being in different creative spheres, an aesthetic in which the earliest examples of architectural rationalism stand side-by-side with the inception of informalist, gestural, chromatically caustic and relatively irrationalist painting.

With the surrealist influence waning, considerations of abstract painting underwent many ups and downs until abstraction was finally revived in the 1980s. At the same time, neorealist photography provides a counterpoint to the painterly space in the shape of urban and social landscapes. Developing later, rationalism in architecture left the founding precepts far behind, its expression critical of thetabula rasa used to build a new world with no reference to tradition. Team 10, an international group of architects whose members included José Antonio Coderch, expressed this critique of orthodox modernism and helped to ‘regionalise’ architectural concepts. This movement, in which Sartoris, Ponti and Zevi all played a role, also extended to the practice of design.

Antonio Bonet was the architect selected by the Gomis-Bertrand family to build their house on the estate known as La Ricarda. The results provided not only an excellent example of modern domestic architecture in our country, but also constituted a veritable centre for cultural dissemination that was visited by the likes of John Cage, Merce Cunningham, Josep Maria Mestres Quadreny, Joan Brossa, Anna Ricci, Joan Prats, Moisès Villèlia and many more. Its owner, Ricardo Gomis, with Joan Prats, founded Club 49 at the Hot Club of Barcelona in 1949. Along with the artists’ collective Agrupació d’Artistes Actuals (AAA), Club 49 played an important role in the beginnings of the first, short-lived, Museum of Contemporary Art of Barcelona.

The exhibition also includes works by Thomas Bayrle, Bestué-Vives, Richard Hamilton, Marcel Broodthaers, Nigel Henderson, Eduardo Paolozzi and Antoni Cumella, as well as a large selection of works on paper by Friedrich Kiesler and a piece by Öyvind Fahlström, shown for the first time as part of the MACBA Collection. The relation between object, image, word and vision form a permanent leitmotiv in a show that compares and contrasts works by artists from different generations and backgrounds.

Daily guided tours (included in admission price)
Available in English on Monday, at 4 and 6 pm; and from Wednesday to Saturday, at 4 pm

Opening times
Weekdays, 11 am to 7.30 pm
Saturdays, 10 am to 8 pm
Sundays and holidays, 10 am to 3 pm
Closed Tuesdays (except holidays)
Open Mondays