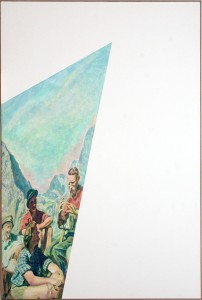 Sprovieri Gallery is delighted to present The Flying Paintings , a new series of paintings by Ilya and Emilia Kabakov. The Kabakovs are Russia’s foremost living artists.

In 2008 they launched the Garage Centre for contemporary art in Moscow, exhibiting their total installations for the first time in twenty years since they left the country, and their exhibition Incident at the Museum and Other Installations at the State Hermitage Museum in St Petersburg in 2004 was the first exhibition by living Russian artists ever to be held there. Ilya Kabakov has written of “the aura which comes from our past” as being “what stops us from sinking into oblivion, and what we call our culture, our interior world.” The ‘interior world’ of which he writes is frequently referred to in their works with their use of the colour white; as such they follow in a tradition of Russian artists and writers who have made a link between white and an ideal spiritual state, most famously Kasimir Malevich, who used it in his 1918 painting White on White to represent a state of pure feeling and perception. The Kabakov’s work is also closely connected with the notion of utopia (having spent much of their lives living within what was to become the failed soviet utopia), exploring whether it has (or can) ever actually exist, without loosing their optimism in its potential. Each work in The Flying Paintings depicts one or more idealised scenes that float within the white space of the canvas: one’s gaze transcends the actual scenes depicted, as if they are a dream or half recalled memory. While some of the scenes are specifically Russian (showing, for instance, women in traditional dress) for the whole they are universal. Throughout the series the process of reading and interpreting is obstructed by the painting technique itself: sometimes they are depicted as if seen from a sharp angle, tilting or lying across the canvas and at times they disappear altogether off the edge of the canvas. Painted in the Impressionist manner, the works invite the viewer to compensate for the missing details with their own input, though the lurid colours and stylised outlines give the scenes a more hallucinatory and claustrophobic atmosphere than the naturalistic depictions of landscape of the Impressionist painters. Even though posited within the ‘ideal’ and interior space of the imagination, the experience of reading and interpreting the works is stunted, their overriding effect more atmospheric than factual. One’s response is to read each scene more as a site of a failed utopia than a living real and to question whether it was the ‘ideal’ and ‘supreme’ white space of contemplation that failed to communicate to contents of the works, or the viewer’s fantasy that was flawed from the outset. 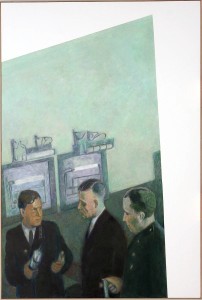 Now based in America, Ilya and Emilia Kabakov collaborate on environments that fuse elements of the everyday with those of the conceptual. While their work is deeply rooted in the Soviet social and cultural context in which the Kabakovs came of age, it still attains a universal significance. Since the early 1990s they have collaborated to make complex installations that combine references to history, art, literature and philosophy. Much of their work has revolved around the creation of fictional characters and elaborate situations, and an interest in storytelling and fantasy underpins their art. Ilya Kabakov coined the term ‘total installation’ to describe these all-encompassing environments, in which viewers find themselves completely absorbed by the atmosphere of the work. Whilst best known for their large scale and all encompassing installations, Ilya Kabakov has painted throughout his career, working frequently in series.

Their work is included in the collections of most of the world’s major museums, including MoMA in New York, Tate Modern in London and The Pompidou in Paris, and has been shown in such venues as the Museum of Modern Art, the Hirshhorn Museum in Washington DC, the Stedelijk Museum in Amsterdam, Documenta IX, at the Whitney Biennial in 1997 and the State Hermitage Museum in St. Petersburg among others. In 1993 they represented Russia at the 45th Venice Biennale with their installation The Red Pavilion . The Kabakovs have also completed many important public commissions throughout Europe and have received a number of honours and awards, including the medal of friendship from the Russian President in 2009, the Praemium Imperiale in 2008, the Oscar Kokoschka Preis, Vienna, in 2002, and the Chevalier des Arts et des Lettres, Paris, in 1995. The Kabakovs live and work in Long Island, USA.