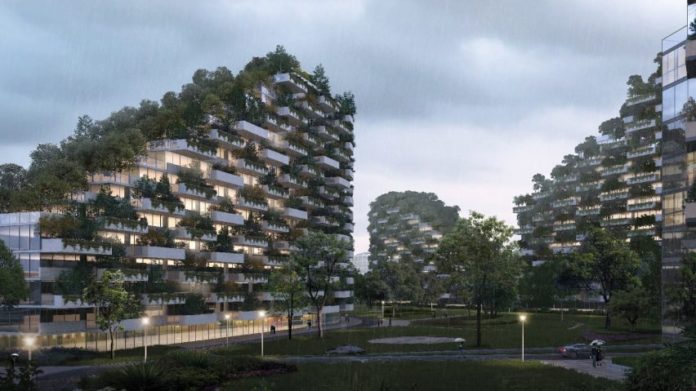 In a year filled with turbulent politics, humanitarian crises and environmental issues, designers have responded with imaginative concepts and solutions. Design editor Alice Morby continues our review of 2017 with her pick of the best.

Architect Stefano Boeri wants to help rid China of its smog problem with his design for a “vertical forest” city.

Proposed near China’s Liuzhou, the new city will feature nearly 40,000 trees and almost one million plants, comprising 100 different species. The greenery is designed to trail over the balconies and roofs of a series of skyscrapers, helping to neutralise pollution in the air.

During this year’s London Design Festival, start-up company Pentatonic revealed its mission to “radically transform consumption culture”, unveiling a collection made from waste materials such as cigarette butts, smartphones and cans.

The company also operates a “circular economy” system, allowing customers can sell back old pieces of furniture, so that they can be recycled and reintroduced into the supply chain.

The platform allows hosts to provide rooms to displaced people for free. Airbnb hopes it will provide temporary housing for 100,000 people within five years.

Find out more about Open Homes ›

The Ocean Cleanup by Boyan Slat

Dutch engineering student Boyan Slat wants to to rid the oceans of plastic by using a floating barrier that slowly pushes objects to shore.

This year, the designer revealed plans to start the project, called Ocean Cleanup, in 2018. The major operation will target the Great Pacific Garbage Patch – a swirling vortex of mainly plastic waste located in the northern part of the Pacific Ocean.

Find out more about The Ocean Cleanup ›

After Donald Trump’s inauguration at the beginning of 2017, designers Jayna Zweiman and Krista Suh created this pink hat with cat-shaped ears as a reference to a recording of Trump released during the election campaign, in which he claimed to grab women “by the pussy”.

The hat was worn by people attending the worldwide marches for women’s rights, which took place the day after the inauguration.

Find out more about Pussyhat ›

When stepped on, the tiles cause electromagnetic induction generators to move – setting off a rotary motion that in turn generates power. According to Pavegen, one footstep can generate enough energy to power an LED lightbulb for around 20 seconds.

This year saw Dutch designer and anti-pollution activist Daan Roosegaarde unveil the next concept in his Smog Free Project– a bicycle that could inhale polluted air,  clean it and release it around the cyclist.

The Smog Free Bike is Roosegaarde’s latest concept in his quest for unpolluted cities, which has previously seen him design a Smog Free Tower that he installed in Rotterdam, and more recently Beijing.

Indian startup company Graviky Labs, made up of MIT Media Lab graduates, has developed a technique for transforming carbon emissions from vehicles and chimneys into ink.

The company’s Air Ink is made from the unburned carbon soot that comes out of car exhaust pipes, chimneys and generators. It has already been put into use by a designer at this year’s Dutch Design Week, who used it to pattern a range of scarves.

Find out more about Air Ink ›

IKEA won the Design of the Year prize in 2017, for its flat-pack refugee shelter. The Swedish furniture giant followed up the good news with a huge announcement – that it planned to take 200,000 people out of poverty in a massive social sustainability drive.

The company is already employing refugees at production centres in Jordan, in the production of woven products including rugs, cushions and bedspreads, and intends to expand the operation in the near future.

Ten students from Finland’s Lahti University of Applied Sciences designed this collection of essential furniture items for those who have had to suddenly leave their homes without belongings.

Students came up with a list of things that would cater to “the most urgent human needs”, which they identified as sleeping arrangements, privacy, and social interaction.

Find out more about Rehome ›

Ariella Azoulay "From Palestine to Israel" a photographic record of destruction...