The best piece of design in e 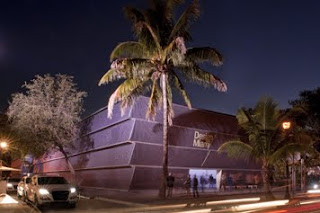 vidence at the fifth installment of Design Miami may have been the fair itself. Developer/impresario Craig Robins, Ambra Medda, the event’s director, and her equally chic brigadier general Wava Carpenter, and their staff all managed to pull off a feat of legerdemain: Design Miami appeared to be growing, even as it was actually shrinking.

Only 14 galleries took full-sized spaces this year, down from 24 the year before. The city block-sized, tiered, fabric-skinned exhibition hall—the work of the hip New York architecture and design studio Aranda\Lasch—might have seemed like a blimp hangar built for a biplane if not for several cool, clever, and in some cases kind of baffling sideshows arranged by Medda and company.
They tapped pop culture: in one booth the excellent upstart rock band OK Go played nightly mini-sets sponsored by Fendi (the design connection being that they played fur-trimmed, laser beam-shooting Gibson guitars tricked out by designer Moritz Waldemeyer). They embraced mainstream luxe: in one airy corner of the pavilion Audi debuted it new sedan, the A8, on opening night. They fostered a connection between design and investment: in their VIP lounge the fair’s longtime sponsor, HSBC Private Banking, initiated its own foray into the world of bespoke design, unveiling a kind of underwhelming shelving unit—consisting of boulder-shaped stainless steel forms that support horizontal walnut planks
—by Arik Levy. 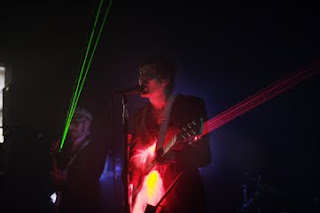 Other sponsor-driven exhibitions included an installation by architect Greg Lynn hanging from the rafters: a trio of huge sail-like carbon-fiber panels studded with thousands of Swarovski crystals. Last year—in a fit of pique over slow sales—designer Tom Dixon heaved one of his thick metal Flame chairs into Biscayne Bay. He fished the chair out this year, and it sat—salt-pitted, and festooned with a bit of seaweed and a buoy—atop a platform in a space sponsored by Veuve Clicquot. Dixon says he reasoned that the year underwater would add to the “narrative” (and therefore the value) of the chair. He promised to submerge it again if no one bought it this year. There’s been no word on a sale, though it’s to be hope someone bought the ratty thing.

As final bits of filler, a large area was given over to an exhibition of mostly contemporary designs from Latin America, and, in what appeared to be an effort to meld performance art with the blogosphere mentality, the fair organizers made room for “Workshop Workshop.” Described as “a salon and ‘zine”—does anyone use that word anymore?—“making factory,” the space consisted of a warren full of detritus—chairs, a broken table, bits of plywood—adjacent to a raised booth in which people were tapping away on computers. The main product of this workshop, it seemed, was confusion.

As for the work on sale, here are some notes and observations:

*Everything Old is Somewhere Else
Contemporary material ruled the pavilion—and notably contemporary work that seemed gauged to appeal to the sensibilities of art collectors. To wit: vases made of animal bones found on the banks of the River Thames (Gallery Libby Sellers, London); New York art dealer Paul Kasmin presented material conceived by the ever-fertile, often crazy mind of designer Mattia Bonetti; there were rope-covered pendant lights by Kwangho Lee and Greg Lynn’s seven-foot in diameter fiberglass chandelier, which looked like a punctured monster puffer fish as envisioned during an acid trip (Johnson Trading Company, New York); and a maple table with better than 20 slumped-glass decanters seared into its top, covering the entire surface (Droog, New York).

If you discount Patrick Seguin of Paris—who came to Miami to sell three restored modular buildings designed in the 1940s and ‘50s by Jean Prouvé–just two dealers presented predominantly vintage material in their booths. Paul Donzella of New York’s inventory included such mid-century pieces as a sleek console by Ico and Luisa Parisi, a Paul Laszlo table with a sculptural ebonized wood base and a clear Lucite top, and a pair of lush Parisi club chairs. Seeing such work amid the razzle-dazzle of the contemporary pieces felt like having a warm bowl of Mom’s split-pea soup after a week-long diet of foie gras. 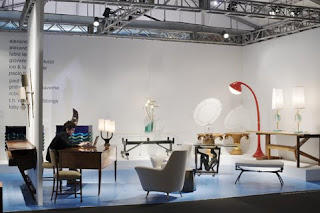 The other vintage-oriented gallery was New York’s Sebastian + Barquet, which presented an enlightening show of Mexican modernist design. While the work of several familiar names were on view—Pedro Friedeberg, designer of the iconic hand-shaped chair; the architect Luis Barragán; artist/architect Juan O’Gorman—a number of works came as a revelation. Don Shoemaker, an American expat, developed a diverse repertoire in the Sixties, making both sensuously-lined wood-and-leather pieces as well as minimalist X-shaped chairs. S+B presented a pair of white resin chairs that would have looked at home on the set of “A Clockwork Orange” and were, to my surprise, designed by Arturo Pani—a “society” decorator whose work was usually elegant and tradition-inflected. 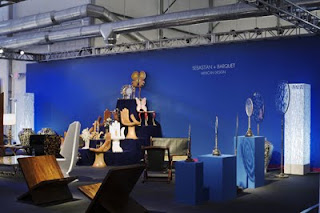 Sebastian + Barquet looked south of the Rio Grande for the exhibition

Design Miami offered a demonstration of the primacy of Dutch work in the world of contemporary design. Start with the naming of Maarten Baas as “Designer of the Year.” Cocksure, provocative, and creative, Baas, who is only 31, has already—thanks in no small part to the patronage of influential gallerists such as Murray Moss of New York—created several series that have entered the design canon of the new century. 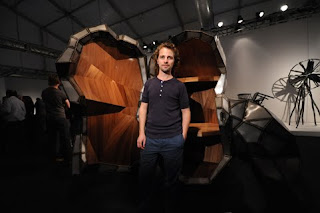 The keynote of Baas’s work is transformation. His “Where there’s Smoke …” series—in which Baas sets iconic pieces of traditional and modern furniture afire and, once they are well-charred, seals the surface with a clear polymer coating—is his best known. In his “Clay” furniture series, Baas played with the notions of art and craft, by hand-molding a ceramic paste around a metal frame. His “Treasure Chairs” mock the idea of symmetry, in that no two structural components of the chair are the same shape. All interesting pieces, which is not to say that Baas is without his misfires. At Design Miami, gawkers stared at some poor schnook sitting in a tiny box, painstakingly drawing moving hour and minute hands that were projected onto the face of Baas’s “Real Time Clock.” Didn’t Dante describe something like this in “The Inferno”? 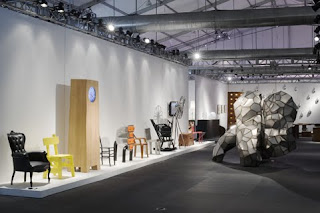 The Designer of the Year exhibit of Maarten Baas Work

The “Designer of the Year” exhibit of Maarten Baas work

Some new Baas “Smoke” pieces were on view at the Moss booth, including a burnt Frank Lloyd Wright “Taliesin” lamp and an Ettore Sottsass “Carlton” room divider. And there are Dutch design around every corner. VIVID Gallery of Rotterdam devoted its space to the “Farm” series by another au courant name in design, the duo Studio Job. The series centered on humble country implements—a bucket, tankards, a milking stool, and a cooking pot, for example—rendered in gleaming bronze. Droog, which was founded in Amsterdam in 1993, trotted out work from a roster of The Netherlands’ finest: Jurgen Bey ‘s log bench, a child-size version of the Joris Laarman “Bone”, Iris Nieuwenberg’s precious brooches, and Droog’s greatest hit, “Cabinet,” the belted clutch of drawers by Tejo Remy. The best of the Dutch design galleries, to this eye, is Priveekollektie, which is based in the town of Heusden, but seems to have a recruitment office at the famed Eindhoven design academy. The gallery fosters young designers whose work is not meant to shock and defy convention. Rather, the pieces are both practical and attractive. The chromed steel-and-leather “Ocho” by the design team Kranen/Gille was a standout, along with buoyant lighting pieces, designed by Emmanuel Babled, composed of black and white Murano glass spheres. 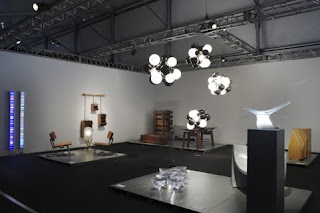 One of the more provocative presentations was made by the Seomi Gallery of Seoul. Contemporary Korean represents a synthesis of influences and materials that is at once startling and sublime. The use of concrete and the organic forms of many of the pieces seem drawn from Western models, but the allusions to nature and the use of ceramics stem from ancient Asian cultural traditions. In some works, ceramics are used as a base for concrete bench, creating an amalgam that is counterintuitive: we think of ceramics as fragile and concrete as crushingly heavy. Shouldn’t the construction be the other way around? It’s a koan of design. 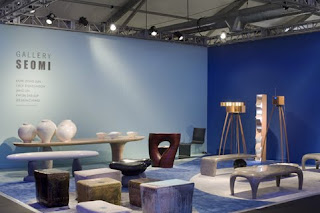 Last, a tip of the cap to Ayala Serfaty. New York dealer Cristina Grajales devoted almost all the space in her booth to the Israeli designer’s lighting pieces, and it was an honor well deserved. Serfaty builds her pieces around a framework of toothpick-thin glass rods. The interstices are covered in a thin polymer skin. The construction is incredible, and the effect is mesmerizing: the lamps seem otherworldly, like glowing coral reefs. 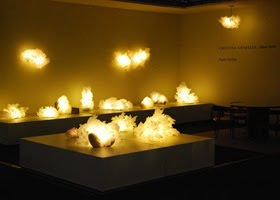 It is pieces like Serfaty’s that make you look forward to Design Miami 2010—unless that barnacle-encrusted chair shows up again.