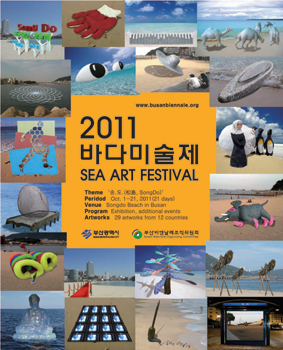 The Sea Art Festival, which was launched as part of the pre-Olympic cultural events for the 1988 Seoul Olympics, is a unique art exhibition taking advantage of the natural surroundings of the city of Busan. The Festival served as a critical turning point for site-specific public art by departing from cube-shaped art museums, selecting spaces for everyday life as exhibition venues, and absorbing the environment into part of the arts. The liberty of planning through the creative destruction of spaces, with exhibitions utilizing both indoor and outdoor spaces, has earned the Festival such adjectives as open, popular and experimental.

SongDo Beach started to be developed as a beach and resort area at the beginning of the Japanese Occupation in 1910, and soon thereafter emerged as a beach of national recognition. However, with the country going through liberation, the Korean War and industrialization, rising population and resort facilities resulted in the contamination of the sea water, and subsequent flood damage led to the beach losing its sandy area. Those circumstances put the Beach on the path to decline in the 1980s. The city of Busan then prospered significantly when the old city center became full of vitality. As the area of SongDo is located near the old city center, the history of the area surrounding SongDo reflects the ups and downs of the city. Now, as the city stands at a turning point on development and growth, SongDo Beach is back on track to regain its past fame.

The 2011 Sea Art Festival, which is taking fresh steps as a stand-alone exhibition, seeks to place a particular focus on the new vitality of SongDo and the old city center and the dynamism of the city of Busan. The Festival has chosen SongDo as the theme to create an open art festival thart showcases artworks taking full advantage of the beautiful surroundings of SongDo.

The Sea Art Festival 2011 will bring together 29 artworks created by artists from 12 countries, including the US, Japan, Germany, Italy, France, Australia, China and Slovenia. Peter ‘Beatle’ Collins (Australia), who is an artist-cum-surfer, presents a life-size crest of a wave made of eucalyptus branches to evoke the adrenaline-pumping experience of the “fight or flight” response when faced with an enormous wave in real life. Tian Ye (China) used a unique method of roughly connecting to a piano the materials with no apparent relation to music in order to remind us that music can be performed with any material from natural substances to metals. The 6-meter-long huge fish is the work of Ryf Zaini (Singapore). The fish, which departed from the sea and has settled on a beach, has a building-like structure wrapped around itself as part of its attempt to adjust to a new environment. The fish symbolizes countries which are defined by high-rises of the most complicated designs. Yoshinori Niwa (Japan) presents on a billboard a group picture composed of total strangers. The artist created the work by randomly gathering people in Busan with an aim to provide the common frame of “us” through a photograph for a group with no common denominator.

The press opening for the Sea Art Festival 2011 will proceed at the venue for the Documentary Photo Exhibition at 2 pm on September 30, one day before the opening of the Festival. The opening ceremony, which consists of programs such as the awards ceremony and congratulatory performances, is set to begin at the special stage on SongDo Beach at 5 pm on October 1. The ceremony will be joined by the Mayor of Busan Metropolitan City, who serves as the Chairman of the Busan Biennale Organizing Committee, the Executive Director of the Busan Biennale, participating artists and Busan citizens.

As part of the accompanying events, the ‘The Documentary Photo Exhibition’ will take place from October 1 through 21 to provide visitors with an opportunity to check out photographs featuring the past of the Sea Art Festival and SongDo Beach. On October 2, the recipients of the Grand Prize and the Excellence Prize of the Sea Art Festival 2011 will meet visitors through a program titled ‘The Artists Talk’, which is designed to pique interest among the public in exhibited artworks and contemporary art. The two events will take place at POONGLIM i-want located near SongDo Beach. ‘The Sea Art Fun Zone’, which will be prepared at the Central Deck of SongDo Beach(next to Hyeon In Square) and invite the participation of visitors during the entire period of the Festival, consists of Book Cafe, DJ Box in the Memory, Sand Box, Caricature Drawing and Flower Seeds Planting.