Period rooms are a s 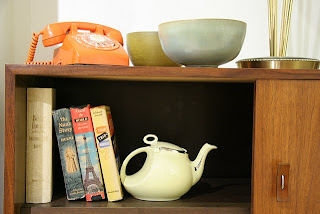 taple of museum decorative arts collections: they are carefully-curated, almost theatrical, sets offering authentic snapshots of the tastes that reigned in decors of times gone by. For those who appreciate design of more recent vintage, however, such rooms are often frustratingly fixated on the deep past. The “youngest” period room in New York’s Metropolitan Museum of Art, for example, is a 1914 “Prairie-style” space by Frank Lloyd Wright. Magnificent, but, still, a touch moldy. 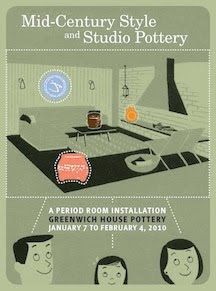 Fortunately, for aficionados of mid-20th century design, there is a period room on view through February 10th that perfectly recaptures the culture-and-cocktail-fueled (although in this case probably exceptionally art-minded) brio of a living space from the 1950s and ‘60s. The exhibit, titled “Mid-Century Style and Studio Pottery,” on view at the pottery school of the venerable New York social services organization Greenwich House, serves as much of a celebration of an era of art and design as is does to the vibrancy of the ceramics school, now entering its second century, and its parent institution.

The idea of context was the engine behind the exhibition. As the pottery school’s director, Sarah Archer, puts it, “2009-10 is our centennial year, so we wanted to showcase artists from our past, and demonstrate how our heritage dovetails with other aspects of art and design from that era.” The first idea that came to mind was “to reconstruct a domestic environment.” Members of the Greenwich House Pottery community responded enthusiastically, and loans were cheerfully offered by such galleries as Rago Arts in Lambertville, N.J., ReGeneration Furniture of Manhattan, and Astro-turf Antiques in Brooklyn. The show, arranged on the second floor of the pottery school’s red-brick building on Jones Street is Greenwich Village, is much more welcoming than the period rooms at the Metropolitan or the Brooklyn Museum: no guard rails or velvet ropes bar off the pieces, allowing visitors to feel at home in a room that appears unchanged from the post-war era. 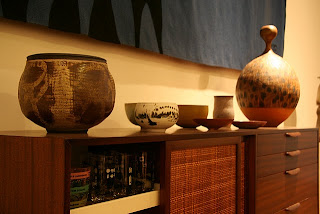 Studio ceramics, naturally, take pride of place. On display are works by Peter Voulkos, Gertrude and Otto Natzler, Beatrice Wood, Edwin and Mary Scheier, and other celebrated ceramists, some of whom also happen to be tied to the history of the institution. Voulkos—who, with his Abstract Expressionist verve that celebrated the very act of creation, almost singlehandedly elevated ceramics to the realm of fine art, rather than mere craft—taught at the Greenwich House pottery school in the early 1960s. His work is represented in the exhibition by a wood-fired stoneware tea bowl. 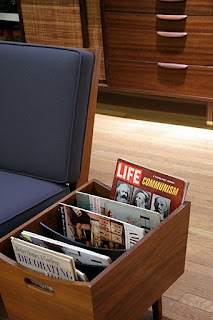 The pottery together with the furniture exemplifies the striking contrast found in mid-century modern style between sleek and organic handmade forms. The room is laid out like a living-dining room. An Eero Saarinen “Tulip” table, flanked by two William Katavolos designed “T” chairs, is arranged against the far wall between two street-facing windows. In front of the fireplace sit a George Nakashima couch upholstered in Knoll fabric along with a pair of small Harvey Probber lounge chairs with walnut frames. These bracket a rosewood and aluminum side table topped with vintage copies of lamentably long-lost magazines such as Look, Life, House & Garden, and Holiday. Textile hangings, posters, and photographs from the era decorate the walls. 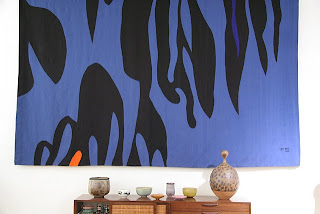 Among these is an eight-foot-by-twelve-foot blue, black, and red tapestry from 1968, which adorns one wall. This visually stimulating piece immediately draws the viewer’s eye, and its title, Jungle, conjures ideas of wild mystery. Woven in the manner used in Aubusson tapestries, the abstract design sparks comparisons to Ellsworth Kelly’s similarly sized color-field paintings, or works by Henri Matisse such as The Dance. This tapestry was designed by Jan Yoors and woven by his wives Annabert and Marianne. Both women were married to him at different times and they all lived together in a ménage à trois after the three, who were close during their youth, fled to New York from Belgium following WWII. This is a story that begs to be told, and will be soon, in the pages of Modern. 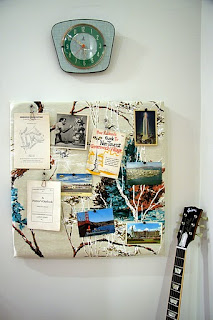 Bed Down with Reindeer at Carsten Hoeller’s Berlin Show at Museum...