Attila Szucs
The Hidden and the Revered 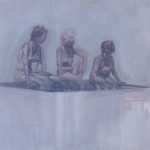 Priska C. Juschka Fine Art is pleased to present The Hidden and the Revered, Hungarian artist Attila Szűcs’ first solo show in the United States, with an exhibition of carefully painted canvases alluding to the assumed reality of the generally depicted by revealing its representation as a mere diversion for our cognitive system and collective intelligence.

Technically and conceptually, in Szűcs’ paintings, information filters through a smoke screen of delicately painted layers covering individuals, animals and objects with a soft blanket of white light, forcing the audience to adjust sensorially to the details of the narrative.

Szűcs leads the viewer through an initially mundane, subsequently odd and alien territory into the depths of the collective unconscious, guiding the senses gently deeper into a world concealed from the human eye.

Using singled out sources from news and mass media, Szűcs stages compositions void of overt explanations, causing a sense of memory loss, angst and alienation rather than the satisfaction of a shared collective memory of imagery.

By magnifying the presence of individual subjects and objects isolated from their historical or pictorial context and insulated by the absence of ad hoc references, Szűcs charges through an uncharted visual repertoire, conscientiously laying the grounds for new framework formations.

Ultimately, Szűcs’ omissions on the canvas leave space for speculation and imagination, providing the viewer with a platform to reconstruct the reality of the depicted and the discourse of the hidden and the revered.

Attila Szűcs was born in Miskolc, Hungary and currently lives and works in Budapest where he is a professor at the Hungarian Academy of Fine Arts and one of the leading painters of his generation. He has shown in numerous solo and group exhibitions in the United States and Europe, including exhibitions at the KW Institute for Contemporary Art, Berlin; Ludwig Museum, Budapest; Künstlerhaus Bethanien, Berlin; and Teylers Museum, Haarlem, The Netherlands. His works are also held in permanent collections such as Neue Galerie am Landesmuseum Joanneum, Graz, Austria; Hungarian National Gallery, Budapest; Ludwig Museum, Budapest; and Frissiras Museum, Athens, Greece. He is currently included in the group exhibition After the Fall from September 19, 2010 – July 26, 2011 at the Hudson Valley Center for Contemporary Art in Peekskill, NY.