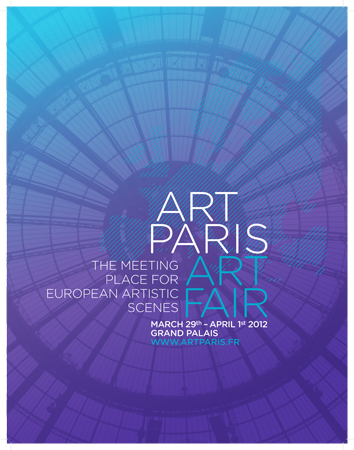 Art Paris Art Fair, the Springtime fair for Modern and Contemporary Art in Paris
From March 29th to April 1st, 2012, Art Paris Art Fair brings together 125 international galleries and editors under the majestic glass dome of the Grand Palais. The 2012 edition is a turning point in the evolution of the fair, bringing a new focus, a new team and new events.

New Ambitions for 2012: Promoting European Artistic Scenes
Art Paris Art Fair has set about exploring the diversity of contemporary creation throughout Europe. The general sector will offer an international overview of the arts in the 20th and 21st centuries, while a series of platforms will turn the spotlight on a European city or region to highlight a particularly vibrant energy of a specific decentralized art scene.

Art Paris Art Fair is also launching a European Creative Design Sector under the title “Séries Limitées”, as well as a VIP programme for collectors called “Springtime in Paris.”  In addition a programme of talks will be initiated in the Grand Palais.

Maurizio Cattelan’s Golden Toilet in the Time of Trump

Out of Art into Literacy at NGA London