Some 70 art galleries from the UK and around the world are exhibiting at the 12th annual Art London, which opens in the special marquee at the Royal Hospital in London’s fashionable Chelsea from Thursday 7 until Monday 11 October 2010. The eclectic mix of art on sale offers visitors works by internationally renowned names, as well as accomplished emerging artists. The art comes in many forms and media, including: paintings, drawings, sculpture and photography. These all sell from a few hundred pounds to six figures sums.
Art London 2010 sees a number of new international contemporary galleries exhibiting including Comodaa (Australia) and Villa Del Arte (Spain) as well as other galleries from France, Argentina and the Czech Republic. Returning exhibitors include Whitford Fine Art, John Martin Gallery and The Albemarle Gallery.

This year the fair sees an increased number of exhibitors showing and selling historical works, including Derby based Neptune Fine Art, a newcomer to the fair, which is bringing a ‘Street Scene’, 1953, and a ‘River Scene’, 1944, by L. S. Lowry and ‘Still Life with Lemon’, 1977, by Mary Fedden. 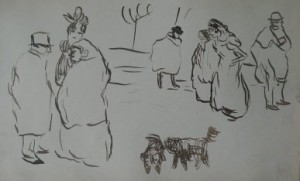 The Court Gallery in Somerset is bringing two extremely rare items: an early Picasso drawing, ‘Personnages et Deux Chiens’ from 1901, and a bronze by the celebrated English sculptor Frank Dobson ‘Wading Female Figure’, a study for Cornucopia, possibly a one-off cast relating to his most important carving, c 1925.
Pre-Raphaelite artist Sir Edward Coley Burne-Jones’ ‘Head Study of Margaret Drummond’ is an initialled pencil drawing, dated Oct 2 1879, selling for £9,500 with Campbell Wilson, which is also exhibiting for the first time.
Whitford Fine Art has works by Pop artist Clive Barker, and painters William Gear and Kudditji Kngwarreye. ‘Landscape, Blue Element’ by William Gear, 1959, was painted at the time when this Scottish artist was curator of the Towner Art Gallery in Eastbourne. Aboriginal artist Kudditji Knwarreye’s landscapes include ‘My Country 06’. In September 2009, Prue Gibson wrote in Australian Art Review, “Although Kngwarreye’s paintings are personal, they are also collective. They document the stories of an entire people. They are closer to narrative than traditional landscape scenes.”

New exhibitor Josie Eastwood Fine Art is exhibiting two very strong young figurative artists, one of whom has been tipped in the Financial Times as an artist to follow – Emily Gregory Smith from Wales. The other Oliver Akers Douglas, has had three sell-out one man shows in London. 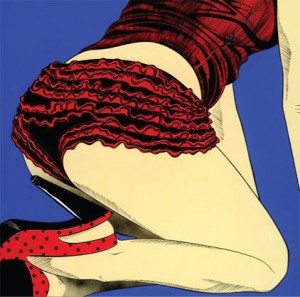 The Cynthia Corbett Gallery presents photography by Tom Leighton for the first time at Art London, as well as work by Klari Reis, light sculptures by Nicolas Saint Gregoire and paintings by Deborah Azzopardi. Tom Leighton’s deconstructed and digitally reconstructed urban landscapes are vibrantly transformed into unrecognisable architectural and metropolitan scenes.
Photographs by Mikael Lafontan are amongst the exhibits on Parisian gallery Envie d’Art’s stand. He highlights natural textures and details of wood, water and leaves. Envie d’Art is also bringing work by Edouard Buzon, Peter Hoffer, Peter Keizer, Yves Krief, Patrick Smith, Joseph and Robert Bradford.
Galerie Olivier Waltman, also from Paris, presents photography by Jean-Pierre Attal with his lambda prints mounted on aluminium, Spanish photographer Aleix Plademunt from Spain and Israeli Tali Amitai-Tabib, as well as paintings by Patrice Palacio and New York based Jérôme Lagarrigue. The Metropolitan Opera, in New York, commissioned a large painting by Jérôme Lagarrigue for their last production of Tosca and photographer Tali Amitai-Tabib was commissioned to do a series of photographs on the Camondo Museum in Paris, which were exhibited at the Museum of Jewish Art and History in Paris. She is having a solo show at the Tel Aviv Museum in February next year.
Stephanie Hoppen Gallery is showcasing artists Anne Penman Sweet, Ronald Dupont, Francois Bard and photographers Hendrik Kerstens, David Chow, and Patrizia Medial. Francois Bard’s dog paintings are rare and so sought after that they never usually make it to a gallery show. Stephanie Hoppen Gallery has managed to secure one to bring to Art London 2010. Hendrik Kerstens is self taught and only photographs his daughter. He has a photograph showing in the National Portrait Gallery. His work was included in an Alexander McQueen fashion show, who was the subject of one of his commissioned portraits for the New York Times.

This year’s charity partners include the Almeida Theatre and Amber. Amber gives unemployed young men and women the chance to sort out their problems and make a fresh start. The Almeida Theatre is showcasing the work of photographer Simon Annand, with images from his book ‘The Half’, named after the 30 minutes before curtain-up, when he had unprecedented access to the leading actors backstage including Cate Blanchett and Jonny Lee Miller.
Organiser Ralph Ward-Jackson, director of Art London, said, “Art London provides a diverse mix of art from around the world under one roof for discerning collectors, artwork for pure enjoyment, statement pieces for the home or office, or an alternative to under-performing traditional assets, from which you can derive pleasure.”