Russian painter and conceptual artist Alexander Melamid is to have a solo exhibition of thirty paintings at Phillips de Pury & Company in London.

Including the now renowned series of life-size portraits of hip-hop stars such as Snoop Doggy Dog, 50 Cent and Kanye West, the paintings then shift from ‘fame’ to the ‘mundane’, with a further group of works from 2008 that have so far remained unseen, including portraits of priests and rabbis, Russian oligarchs, sculptures of ancient Roman figures, animals and stones. Melamid himself is the first to point out the incongruity and irony of these more recent portraits, including within the selection a self-portrait of himself as ‘God’: the ‘artist creator of confusion, incomprehension and absurdity’.

For Melamid (an artist who whilst still living in the Soviet Union saw his works being bulldozed by the state), the repercussions of the fall of communism became clear only after the collapse of the Russian Communist Empire and were mainly connected to the failure of the officially stated goal of the Soviet regime: the creation of a ‘New Man’. In the twenty years since Perestroika, Marxist philosophy, the teachings of Freud, theories of existentialism and many of the other -isms and ideologies that exerted influence in the post-war world have disintegrated, leaving a void of fragmentation and pluralisms in their place. For many people of Melamid’s generation, this void and lack of belief is accompanied by a sense of guilt, that they had perhaps been the ‘jihadists’ for the wrong cause.

In a world where art is judged by how well it reaffirms the preexisting beliefs of its consumers, the role of the artist seems also to be shifting from that of being the ‘messenger’ to being the ‘creator’. Melamid’s portraits speak not only of Shelley’s Ozymandias notion of a previous glory now only existing through its decaying monuments, but also of the processes of growth, change and decay that exist in the world, such as religious and political beliefs, fame, philosophies, beauty, bling and the natural world. In his performance at Phillips de Pury & Company, Melamid will show the tangible benefits of good (actually, great!) art for arts sake – his own included – and furthermore will demonstrate art’s healing power and medicinal properties for the treatment of physical and mental maladies. Melamid begs the question: Should the judgement for the works of Lucien Freud be Are they good for your liver? 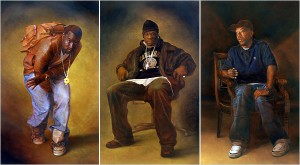 Alexander Melamid
Alexander Melamid (b. 1945) first became known in the USA when still working as part of the duo Komar
& Melamid after their emigration from the Soviet Union in 1977. Together they were known for their creation of
Sots Art, a Russian version of pop art that satirized Soviet Socialist Realism and later was used throughout
the post-communist countries. During their almost 40 year collaboration, the duo were noted as
revolutionaries and, at times, rebels. Their work was often compared to that of Pop artists Andy Warhol and
Roy Lichtenstein. Komar and Melamid’s career began in Soviet Russia, where they met during an anatomy
drawing class in a morgue. They started working together almost immediately, exhibiting first at the Blue Bird
Café in Moscow in 1967. Komar and Melamid often faced government opposition and harassment. In 1974,
they exhibited Paradise, a Moscow apartment covered with light fixtures and small sculptural figures in
various historical styles and movements; audience members were locked inside and forced to listen to official
Soviet radio. The installation was demolished on state order shortly after it opened. Just one year later, they
participated in the Bulldozer Show, an outdoor exhibition that was also bulldozed by the government. These
and other occurrences resulted in their expulsion from associations such as the youth section of the Moscow
Artists Union and the Graphic Artists’ Association.
In February of 1976, Komar & Melamid’s first U.S. exhibition opened at Ronald Feldman Fine Arts in New York.
Biography of Our Contemporary garnered rave reviews and launched the artists into the international spotlight.
Following this success, they applied for exit visas to enter the U.S but were twice denied by the Soviet
government. In response they declared they had created their own “state,” entitled TransState, with a
constitution, alphabet, language, passport, currency, and border post. Eventually, they were allowed to
emigrate to Israel and moved to New York shortly thereafter. That same year, 1978, their first museum
exhibition, Komar & Melamid: Matrix 43, opened at the Wadsworth Atheneum Museum of Art in Hartford,
Connecticut. In 1982, they mounted another show at the Feldman gallery Sots Art which resulted in critical
success, and within the year The Museum of Modern Art, New York, and The Metropolitan Museum of Art,
New York, had acquired their work. Acquisitions by the Solomon R. Guggenheim Museum, New York, and
The Victoria and Albert Museum, London soon followed and the pair subsequently had more than sixty solo
exhibitions worldwide.
Among their most famous works together was People’s Choice, a piece of consumer research in the late 1990s
where they hired a consumer research company to conduct a poll of seventeen countries to investigate their
tastes in art.
In 2003, very soon after Komar & Melamid began to work separately, Melamid’s son Dan, introduced him to the
world of hip-hop, which included his clients and close friends Whoo Kid and 50 Cent. Melamid was intrigued
by hip-hop society because of its rich history and world appeal, and began to paint the portraits in this
exhibition.
In 2008 Melamid stayed in Rome for eight months and his exposure to the portrait busts and sculptures of
Ancient Rome of people so long gone but still ubiquitous became a defining inspiration for the latest
portraits. Whilst acknowledging the strength of the beauty of the works, he was also fascinated by the fact
that one so rarely knows, or indeed cares, whom they depict.