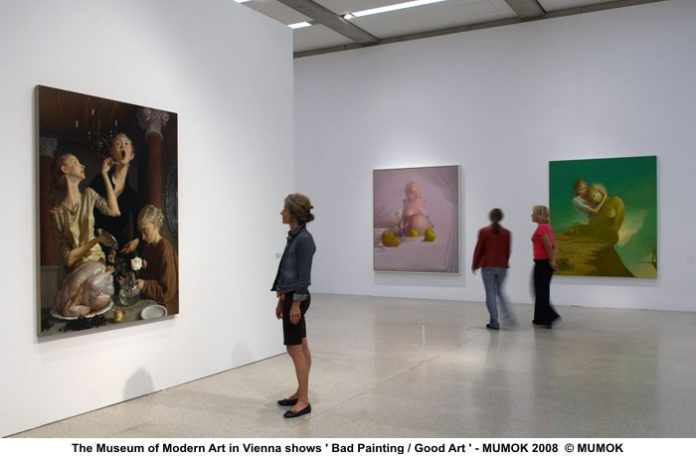 “Bad painting” as a phenomenon

Vienna, Austria – The Museum of Modern Art in Vienna shows “Bad painting” is the critique of painting expressed with its own most essential means: Many of the most important painters of the 20th century like Francis Picabia, René Magritte, Asger Jorn, Philip Guston, Neil Jenney, Georg Baselitz, Albert Oehlen or Julian Schnabel radically called their medium into question using different strategies of incorrect, faulty, ugly or angry painting in order to open up new possibilities for the medium. Using prominent works by 21 artists, the exhibition presents “bad painting” as a phenomenon which opens a new and differentiated perspective on the history of painting since the beginning of modernism which today still influences contemporary discourse.

Painting as a Strategy of Protest
“Bad painters” are nonetheless avowed and steadfast adherents of the medium. They ascribe a critical potential to painting through both turning against the canon of the traditionalists and the dogmatic rules and ideals of the avant-garde. Along these lines, “bad painting” is a critique of modernist utopias and their untenable claims and promises. As an instance of opposition, the strategy of “bad painting”
did not define the entire oeuvre of the respective artists but rather shaped certain phases in their production.

Against the dogmas of classical modernity
Already in the 1920s, Francis Picabia propagated a pluralism and change in styles as an alternative to the avant-gardist belief in linear progress and innovation. Since the end of the 1980s, Picabia has been celebrated as the father-figure of bad painting. In protest against the dogmatism of his Surrealist colleagues. Towards the end of the 1950s, Asger Jorn found in his modifications – painting over pictures bought at flea markets – a way of recognizing the value of kitsch, which he referred to as “bad painting.” “Personally, I like bad better than good.”

Painting against the aversion to painting
Ideological conflicts between abstraction and figuration, along with the aversion to painting by new forces in the avant-garde compelled the “bad painters” to take clear positions in the 1960s and 1970s: Georg Baselitz took “manure, mud and non-colors […] to paint really bad paintings” in order to “establish something against all of the beautiful things […] aggressively and with a fierce contradiction.”
Sigmar Polke formulated his criticism in painting taking issue with the ideological weightiness of the vocabulary of modernism, also working with the phenomenon of kitsch. In America of the late 1960s, Philip Guston turned away from abstract expressionism towards his own idiosyncratic paintings. Today these paintings, which during his lifetime were only met with incomprehension, constitute an important position in “bad painting.” Around 1969/70, Neil Jenney produced a series of paintings which he entitled “Bad” or “Unconcerned Paintings” which he soon discontinued. He knew that even if he “produced the worst possible paintings, these would never be good enough.”

Bad Painting during the painting-hype in the 1980s
Following along the lines of the deconstructive approach of postmodernity, “bad painting” would flourish during the 1980s. Artists such as Albert Oehlen, Martin Kippenberger or Werner Büttner would produce a radical examination of the medium and its possible effectiveness. With their relentless and unsparing critique, they fought against the omnipresent “good painting” that at the time was
booming. The American Julian Schnabel’s refusal to limit himself to a specific style can also be understood in this same spirit of rejecting any kind of rules or commitments. René Magritte moved away from his signature style – if only for a short time. The paintings from his “période vache” (1948) “run through” the formal and intellectual repertoire of modernist painting in a satirical way.

The exhibition leads up to current “bad painting” positions, including John Currin and Lisa Yuskavage. They assail the American canon of values of decency, decorum, “good taste” and beauty in a way which is often condemned as shocking, sensationalist, “politically incorrect” and “reactionary.” Among other things, they work with painting techniques of the old masters in order to criticize the medium and through this to breathe new life into it.

Frick Buys Its First Painting Since 1991