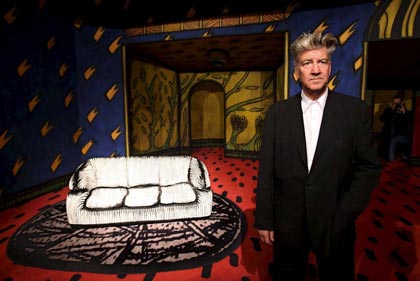 BRUEHL.- “A cult film director from Los Angeles presenting his fine art works for the first time in a German museum. You cannot miss that!”, emphasizes Dr. Achim Sommer, director of the museum and co-curator of the exhibition “David Lynch – Dark Splendor”. Until 21st March 2010 the Max Ernst Museum Bruehl of the LVR presents a selection of 150 art works of the American film maker David Lynch. Some of his works have especially been created for the exhibition. Fine art marked the beginning of David Lynch’s career and he continued in making fine art until today. Painting is an integral part of his artistic work. Themes, motives and the repertoire of shapes of his fine art works and his films mutually interwoven.

Right at the beginning of the exhibition there is a installation which can be entered by the visitors. It is a drawing of the artist translated into a three-dimensional installation, enabling the visitor to directly plunge into his dream world. An interactive sound design by David Lynch is creating a unique atmosphere in the whole exhibition space. Trigger stations may be released by the visitors, generating additional acoustic accents.

In his paintings, water colors, drawings and lithographs, too, David Lynch is leading his spectators into a world of mysteries and the inexplicable. “Our expectations are turned upside down. Hesitantly or willingly we enter his dream world and experience how reality is getting abstruse in it. Always Lynch is interrupting what we are expecting to see. It is about anxiety”, says Werner Spies, main curator of the exhibition and editor of the exhibition catalogue. Dark, subdued colors, shifting of perspectives and proportions are typical for his fine art works. This is what David Lynch has in common with Surrealism on which the artist is referring to. Time and transience are themes of his photographs. One series shows shut down, abandoned and corroded industrial sites. Another series is about melting snowmen in rural front gardens which are called “aliens” by David Lynch. Edited nude photographs and irritating altered photographs of a distraught eroticism enrich the multitude of his art visions.

Parts of his works are shown to the public for the first time, e.g. a series of water colors from the archive of the artist dominated by black color dating from 2009. Some very exciting works are his matchbooks resembling diptychs and enfolding his creative world in miniature. Small Boy in His Room and Pete goes to His Girlfriend’s House are the titles of two brand new paintings which came directly from the studio of David Lynch to Max Ernst Museum Bruehl.

During the exhibition the Max Ernst Museum Bruehl presents some almost unknown experimental short films dating from the period of his studies at the academy. In these films Lynch combines animated sequences with real ones and develops his own handwriting in film characterized by a mysterious atmosphere. His first movie Eraserhead, a surreal masterpiece, which became very famous, is also shown. Christian Fischer, journalist and author of a monograph to this film, will present an “Eraserhead-evening” on Saturday, 27th February 2010 at 6 p.m. A talk on the fine art of David Lynch by Werner Spies, Peter-Klaus Schuster and Andreas Platthaus is scheduled for Saturday, 30th January 2010 at 5 p.m. In cooperation with the museum, the cinema Zoom Kino in Bruehl will show two movies by David Lynch in January (The Straight Story and Mulholland Drive) and a movie by his daughter Jennifer Lynch (Surveillance).

Frick Buys Its First Painting Since 1991

Saint Jerome (around 1605), one of three works by Caravaggio going...