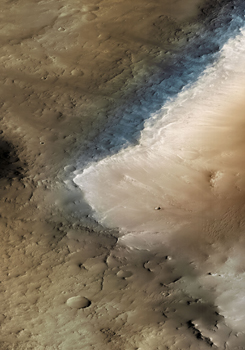 Thomas Ruff is one of the most internationally well-known contemporary German photographers. Over the course of two-dozen photography series, he has explored and defined the medium’s limits like no other contemporary artist. The exhibition in the LWL-Landesmuseum für Kunst und Kulturgeschichte focuses specifically on four of Thomas Ruff’s series: the stars series, produced between 1989 and 1992,zycles from 2007, the cassini series from 2008/2009, and recent work from the ma.r.s. series, shown now for the first time in an institutional context. Individual works from other series that explore a similar theme are also shown.

Since 1989, Thomas Ruff stopped taking and printing his own photographs in order to work with existing materials. His work is primarily concerned with questions that investigate the structure and content of the medium. Scientific images are the source material for all the photographs shown, and many of them were freely accessible via the internet. While Thomas Ruff’s work for the stars series was limited to selecting details from photographs, he took a heavier hand in processing the source material in his new series: for the cassini and ma.r.s. series, Thomas Ruff utilised pictures from various NASA missions. He digitally retouched them, altered the colours, manipulated contrast and cropping. Ruff’s colouration of the original realistic, black and white pictures gives them a new character: they become painterly, aesthetic pictures whose abstract beauty serves as a surface for our imaginations.

More than any other contemporary artist, Thomas Ruff’s work poses questions about the mass production of images. What can an image actually say today and in what ways do we read it? The purpose of image archives and the internet are also central themes of his work, as well as questions pertaining to contemporary artistic license.

The exhibition is supported by the Kunststiftung NRW and the Kulturstiftung der Sparkasse
Münster.

Linder: The Darktown Cakewalk, Celebrated House of Fame | at Chisenhale...