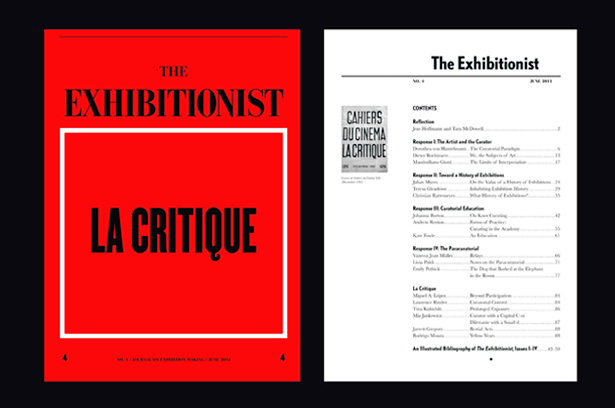 The Exhibitionist is pleased to announce the launch of its fourth issue: The Exhibitionist: La Critique. Comprising three sections—Reflection, Response, and Critique—the issue diverges from the editorial structure of past issues in order to offer a forum for sustained and multiple responses to current curatorial debates as well as a critique of the content and editorial commitments of the journal to date.

In Reflection, the editors address responses to the fledgling journal and clarify the editorial choices and composition of the current issue. The four topics selected for the Response section form the core of this issue. The Artist and the Curator is a subject discussed at length, in both the pages of this journal and elsewhere. Here, Massimiliano Gioni, Dieter Roelstraete, and Dorothea von Hantelmann offer innovative arguments that recognize the complexity and pressures of this relationship, its historical development, and its entanglement with changing cultural conditions. In Toward a History of Exhibitions, Teresa Gleadowe, Julian Myers, and Christian Rattemeyer demonstrate that despite the spate of recent and forthcoming texts on the subject of exhibition histories, this is a nascent history, still very much in formation with much work to be done. Curatorial Education forms the third response, andJohanna Burton, Kate Fowle, and Andrew Renton address the relatively new discipline from a range of professional positions in relation to the respective academic programs with which they have been involved. The fourth and final subject in this section is The Paracuratorial. The paracuratorial practice defines curating not as bound to exhibition making, but rather as encompassing, and making primary, a range of activities that have traditionally been parenthetical or supplementary to the exhibition proper.Lívia Páldi‘s concise, yet performatively accumulative definition put forth in her essay works well: “The term, which encompasses lectures, interviews, educational events, residencies, publications, screenings, readings, and performances, implies an intertwining net of activities as well as diverse modes of operation and conversation based on more occasional, temporary alliances of artists, curators, and the public.”Vanessa Joan Müller limns the historical trajectory of the paracuratorial and Emily Pethick interrogates the boundaries inherent in the term.

The Critique section consists of critical commentary about the journal itself: both its editorial commitments and the specific content of earlier articles. This section permits the brief, but passionately argued, response that is the “letter to the editor”—a response that segues what was once a closed, final statement into an open dialogue. The opinions offered by Jarrett Gregory, Mia Jankowicz, Tina Kukielski, Miguel A. López, Rodrigo Moura, and Lawrence Rinder do not coalesce into a neat mapping of key themes of the journal, nor any illusory status quo of curating. Rather, they are idiosyncratic, wide-ranging, and arise from personal commitments.

The Exhibitionist is a journal made by curators, for curators, focusing solely on the practice of exhibition making. The objective is to create a wider platform for the discussion of curatorial concerns, encourage a diversification of curatorial models, and actively contribute to the formation of a theory of curating. It is published by Archive Books and distributed internationally, selling at major and specialty bookstores and newsstands. Please email Ellie de Verdier at [email protected] for subscriptions and individual copies.

Moscow Museum of Modern Art Presents an Exhibition of the Work...