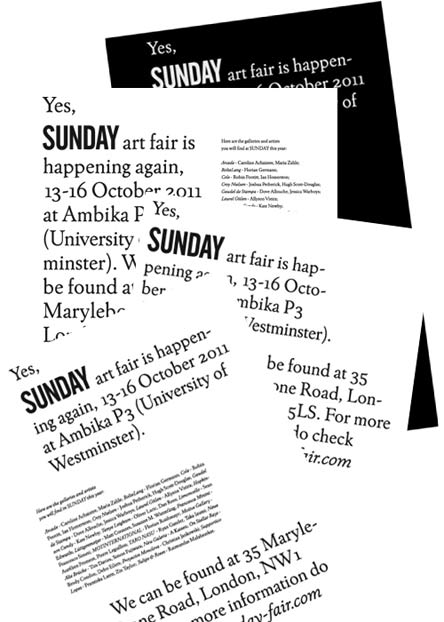 Returning after a successful debut in 2010, SUNDAY art fair will be held for the second time in London this October. Taking place at the Ambika P3 space on Marylebone Road from 13th to 16th October, SUNDAY is a gallery-led art fair showing a selection of 20 young international galleries, exhibiting work by artists at the fore of emerging talent.

Housed in the Ambika P3, a 14,000 square foot, triple height subterranean space, the fair is free and open to all. SUNDAY aims to provide an easy going and accessible temporary platform for young galleries to exhibit their artists’ work. Following from last year, SUNDAY is a fair with no booths or divisions and this year exhibiting galleries will each show solo or duo artist presentations, adding to the open nature of the fair.

SUNDAY’s first outing was in Berlin at the 2010 Gallery Weekend where it was so well received the organisers decided to bring it to London during the 2010 October art week, where it received more than 5,000 visitors over just 3 days.

SUNDAY is organised by three of the participating galleries: Croy Nielsen (Berlin), Limoncello (London) and Tulips and Roses (Brussels) and sponsored by the Zabludowicz Collection.

Bryan’s Bar will be serving refreshments throughout the fair, including cocktails from artist Ryan Gander’s cocktail recipe book, and hold an Art Pub Quiz hosted by artist Bedwyr Williams during the late opening on Friday 14th October.

Independent bookshop Motto (Berlin) and publishing house Archive Books (Berlin) will also be at SUNDAY with a selection of journals and publications available to purchase. Raising funds for their Interaction programme, the Zabludowicz Collection will present their affordable limited editions including a new action figure by British artist David Blandy. Blandy will also host a Duels and Dualities tournament at the late opening on Friday 14th October.