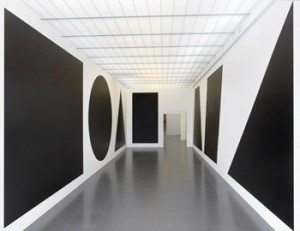 Conceived in close collaboration with the LeWitt Collection (Chester, Connecticut), the exhibition at Centre Pompidou-Metz features thirty-three black-and-white works spanning the artist’s entire career. The retrospective reflects both the extraordinary consistency of LeWitt’s systematic explorations and the remarkable diversity of his revolutionary practice.

The American conceptual artist (1928–2007) created some 1200 wall drawings between 1968 and 2007, developing mainly serial and modular systems through a vocabulary of abstract geometric forms. The first wall drawings explore in pencil combinations of straight lines in four directions, a form LeWitt would return to throughout his career. He then progressively introduced numerous variations: not straight lines, broken lines, grids; simple figures: arcs, circles, triangles, etc. and complex figures, loops, pyramids and “forms derived from a cube”. From pencil and crayon to India ink, acrylic paint, and graphite, the variety of materials used by LeWitt is equally demonstrated throughout the exhibition.

The making of the wall drawings at Centre Pompidou-Metz has been the occasion of an exceptional collaboration with professional drafters trained by the LeWitt studio, local artists, and more than 60 students from local art and architecture schools.

In partnership with the Centre Pompidou-Metz, M-Museum in Leuven (Belgium) presents a chromatic counterpart to the retrospective in black and white, which features over twenty wall drawings in color.

Save the date. Upcoming exhibitions

1917
May 26–September 24, 2012
This exhibition addresses the theme of artistic creation in wartime.

1917 stands out for the extreme diversity of its artistic production. The exhibition sets out to convey this diversity by mapping the various positions of the artists relative to the battlefront. Taking their place alongside the masters are the amateur artists who felt the need to respond to the trials of war through creative expression such as trench art.

As one of the highlights, 1917 presents, in an exceptional staging, Picasso’s largest work: the stage curtain for the ballet Parade, last shown in 2004 in Hong Kong and its first showing in France in over twenty years.

In 2013, the Centre Pompidou-Metz is organizing a second exhibition dedicated to LeWitt, this time featuring an unprecedented ensemble culled from his personal collection including over 250 artworks and documents by LeWitt and numerous other artists. Centre Pompidou-Metz’ two-fold project will thus reflect LeWitt’s extraordinary career not only as a prolific artist but also as an insatiable collector.