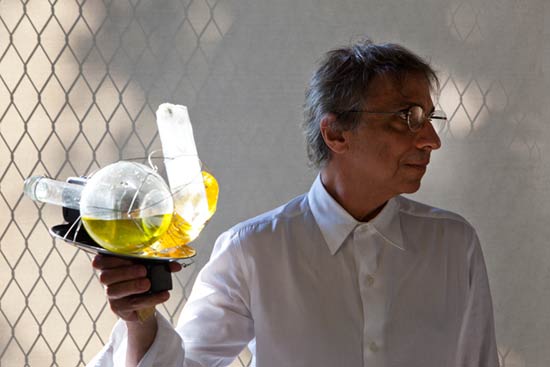 The changes that characterize the 17th Festival find an icon in a trophy created for the Southern Panoramas show by Brazilian artist Tunga. In the sculpture/object he has developed for the event, elements from his own poetic repertoire, such as crystal and liquid amber, contained within a metal mesh, envelope a video camera and half-obscure its lens. The fully-functional camera-trophy affords a view that has been irremediably tampered with by the artist.

Tunga is one of the better-known contemporary artists in Brazil and in the international scene. He has featured in the Venice and São Paulo biennials, and had solo exhibitions at the Whitechapel Gallery, in London (1989), and at the Louvre Pyramid (2005), in Paris. Carmela Gross, Raquel Garbelotti, Luiz Zerbini, and Rosângela Rennó are among the artists who have been invited by Videobrasil to create trophies for previous editions of the Festival.

The trophy will be delivered to the artists awarded with the Grand Prize in cash and the eight residency prizes to be offered by the Festival in 2011. Strategic partnerships with educational, research and production institutions enable the 17th Festival to confer eight residency awards across three continents. The Festival strengthens its partnership network by presenting its programs in detail and participating in work sessions destined to reflection on the impact of residencies on artistic output today.

Another concern reinforced by this edition is that of fine‐tuning the criteria by which an artist is allocated to this or that residency, a decision based not only on the nature of the programs themselves, but also on the characteristics and developmental stage of the work. This aptness is critical in the context of a network that offers experiences as diverse in nature and focus as does ours.

The two Brazilian residencies are a case in point. The FAAP Artistic Residency, which offers two awards through the Festival, is based in the Lutetia Building in downtown São Paulo and stimulates artists to explore the urban context. It is run by the Armando Alvares Penteado Foundation. A third residency takes place at the Sacatar Institute, located in Itaparica, Bahia. This program stresses the importance of its beach-side environment to creating a convivial dynamic for collaborative action between residents. The prize is sponsored by the Prince Claus Fund (The Netherlands).

Two other residencies take place in Latin America, at Galería Kiosko, in Santa Cruz de la Sierra, Bolivia. Created in 2007, the gallery program teams up one Bolivian artist with a non-Bolivian counterpart for a two-month period of collaboration. With a social and political bent, this program encourages artists to tackle cultural issues through original proposals. A member of residencias_ en_red, the residency is granted by the Spanish Cultural Center and the Spanish Agency for International Cooperation for Development (AECID).

The network extends to Europe through partnerships with Videoformes, in Clermont-Ferrand, France—thanks to the French Consulate in São Paulo and Aliança Francesa—and the Vrije Academie voor Werkplaats Beeldende Kunsten, in the Hague, Holland, both of which receive one prizewinning artist. A center for the production and diffusion of artistic languages based on video and digital technologies, Videoformes offers technical support and knowledge-exchange through its residency program. At WBK, the program encourages young artists to explore new visions that might contribute to their work.

For the first time, Videobrasil is offering a residency in Africa. Created in 2003 by an artists’ association, the contemporary art center pARTage, based on the Mauritius Islands, fosters the development of projects that respond to the environment by stimulating interaction with local artists and the islanders in general. The prize is sponsored by The Prince Claus Fund.