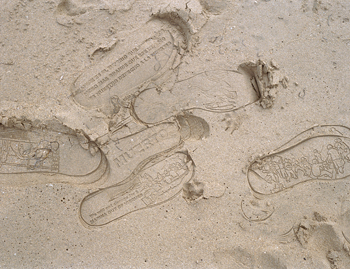 Nobody’s Property: Art, Land, Space, 2000–2010 is the first exhibition to systematically explore an important development in contemporary art: the emergence of a new generation of environmental artists. Forty years ago, Robert Smithson, Michael Heizer, and others started carving, displacing and rearranging raw earth, transforming landscape into sculpture. Today we are witnessing the fruition of this tradition, as artists working across the globe once again embrace land and space as material, stage and subject matter.

Nobody’s Property features the work of seven artists and two artist teams: Jennifer Allora and Guillermo Calzadilla, Francis Alÿs, Yael Bartana, Andrea Geyer, Joana Hadjithomas and Khalil Joreige, Emre Hüner, Matthew Day Jackson, Lucy Raven and Santiago Sierra. Some of these artists explore the representation of space in military, scientific and utopian discourse. Others parse the legal, political and economic conditions of specific and highly contested land-sites, including Vieques, Juárez, Jerusalem and the Navajo Nation. By no means confined to the disposition of matter, as was the case with many of their predecessors, the artists in Nobody’s Property employ a wide range of media and a unique set of working methods. For them, land and space are the physical expressions of human relations: the locations we inhabit and the places we imagine reflect the social, legal and financial networks that alternately bind people together or divide the m from each other.

Land and space are implicated in everything we do, in every action we take, every decision we make and every crisis we weather. Moreover, when either human beings or the environment changes; the other does as well. These changes now occur on a scale and at a pace never seen before, thanks to the proliferation of military conflict and the dizzying pace of urbanization, industrialization and globalization. The artists in Nobody’s Property are responding with equal parts poetry and insight.
Nobody’s Property will be accompanied by a 150-page, fully illustrated catalogue. With contributions by exhibition curator, Kelly Baum, as well as nine established and emerging scholars, the catalogue will include important new research on both contemporary and historical land art. To purchase a copy, please call the Museum store: (609) 258-1713.

Two programs have been organized in conjunction with the exhibition. On Tuesday, October 26, at 4:30, independent scholar Juliana Ochs and Princeton scholar Daniel Heller-Roazen, author of The Enemy of All: Piracy and the Law of Nations, will join artists Jennifer Allora, Guillermo Calzadilla, Emre Hüner and Matthew Day Jackson for a lively discussion moderated by Kelly Baum.

Founded in 1882, the Princeton University Art Museum is one of the nation’s leading art museums, and its collections feature approximately 72,000 works of art. The Museum is located at the heart of the Princeton campus, an hour and a half from New York City by car or train (New Jersey Transit). Admission is free. Hours are Tuesday, Wednesday, Friday and Saturday 10:00 a.m. to 5:00 p.m.; Thursday 10:00 a.m. to 10:00 p.m.; and Sunday 1:00 to 5:00 p.m. The Museum is closed Mondays and major holidays. For information, please call (609) 258-3788 or visit the Museum’s Web site at http://artmuseum.princeton.edu.

Nobody’s Property was made possible by the National Endowment for the Arts; the Virginia and Bagley Wright, Class of 1946, Program Fund for Modern and Contemporary Art; the Frances E. and Elias Wolf, Class of 1920, Fund; the Sarah Lee Elson, Class of 1984, Fund for the International Artist-in-Residence; and an anonymous foundation. The catalogue was supported by the Andrew W. Mellow Foundation Fund for Publications and the Elizabeth Firestone Graham Foundation. Additional support was made possible by the Partners and Friends of the Princeton University Art Museum.