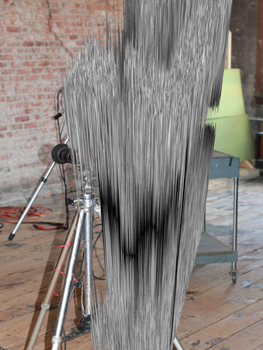 Chisenhale Gallery presents a solo exhibition by James Richards comprising a series of newly commissioned video works set within an ambient display structure tailored to the gallery space and an accompanying programme of events devised by the artist.

The exhibition features a suite of videos collaged from a collection of found audiovisual footage as well as material recently filmed by Richards. Working primarily between moving image, sound and sculpture, Richards often merges these forms within individual works to interrogate the experience of what it is to view and be viewed. This is placed in parallel with his interest in the cultural and emotional resonance of the vernacular visual content he chooses to manipulate, taken from a range of sources such as viral web video footage, mainstream cinema, experimental music and intimate video portraits of friends. Richards often integrates collaborative strategies into his work, with some of the material used in this exhibition gathered by Richards in exchange with New York based artist Steve Reinke during their residency at The Experimental Television Center (Owego, USA), whilst his events programme also includes a number of external artistic voices.

The work is produced for a dual-screen format, which has been inspired by the weightless flat screens now commonly used for advertising in metropolitan high streets. Juxtaposing his personal and highly expressive methodology for composing moving image within a framework more familiar to technological advertising space, Richards seeks to understand our quotidian experiences of digital advertising as engaging an emotional and complex set of relations between audience and images.

An extensive programme of events will be staged throughout the duration of Richards’ exhibition at Chisenhale Gallery, including a new collaboration with Haroon Mirza and Ed Atkins, contextual talks and two screenings, one of which will feature a compilation of video material woven together by Richards.

Saturday 8 October, 11.30am–7pm
Screening of the pioneering videocassette magazine Infermental. Issue Four, a 1985 edition of the magazine, will be shown in its seven-hour entirety.

Saturday 15 October, 7pm
A screening-event organised by James Richards, Ed Atkins and Haroon Mirza. This event is a prologue to An Echo Button, a project being developed by the three artists and curated by Silvia Sgualdini for Performa 11, New York, 1–21 November 2011. An Echo Button is co-presented by Performa and Zabludowicz Collection.

All of these events are free but booking is strongly advised. Please contact [email protected] to make a reservation.