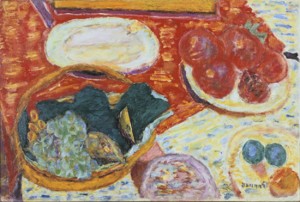 In the Still Epiphany

Sibony is arranging these predominately figurative works within the spaces of Tadao Ando’s building to create a flow of experience that is involving, meditative, and surprising. Modern and contemporary European and American paintings, sculptures, and works on paper—many of them chosen for their depiction of domestic interiors and the figures that inhabit them—are combined with African, Asian, and Pre-Columbian ritual and decorative objects. These groupings resonate within the galleries of the Pulitzer building to impart a distinct character to each space and to offer the visitor a journey through the activity of life as depicted in the frozen moments captured by the works themselves.

In the Still Epiphany bookends the Pulitzer’s first exhibition, presented in 2001–2002, which also drew exclusively from the collection of Emily and Joseph Pulitzer, Jr.. Sibony’s installation not only includes works of art from the private collection but also those given by Mr. and Mrs. Joseph Pulitzer, Jr. to the Harvard Art Museums, Saint Louis Art Museum, and the Mildred Lane Kemper Art Museum at Washington University in St. Louis.

The exhibition will be accompanied by a catalogue with essays by Sibony, the Pulitzer’s Director Kristina Van Dyke, and writer and curator emerita Marjorie B. Cohn.

In the Still Epiphany unfolds in stages, beginning in the small space of the Pulitzer’s Entrance Gallery, which functions like a crowded foyer with a high density of portraits and busts including Vuillard’s Self Portrait (1892) and Auguste Rodin’s Bust of Joseph Pulitzer (1907). Then Picasso’s The Fireplace (1916–17) draws the visitor into the large Main Gallery, where different types of conversations between the works take place. Objects, arranged as a mise-en-scène, include Chinese terracotta vessels from the 6th century CE, an Alberto Giacometti sculpture, and a group of Pre-Columbian works including tribal pots and a headdress ornament made of copper and gold. Nearby are Bonnard’s vibrant, almost electric, painting Still Life with Ham (1940), as well as Matisse’s The Conservatory (1938) and Vuillard’s Woman in Green (1909), both of which depict reclining women lost in thought.

A narrow passageway leads into the Cube Gallery, where Fontana’s painting Black Landscape (1966), acts as night-sky theater box, in front of which an armature holds two prehistoric sculptures—a terracotta from Pakistan entitled Mother-Goddess Holding One Breast (c. 3000–2500 BCE) and a standing figure made of stone from Africa (c. 4500-7000 BCE)—that serve as a formulation of the mystery of life.