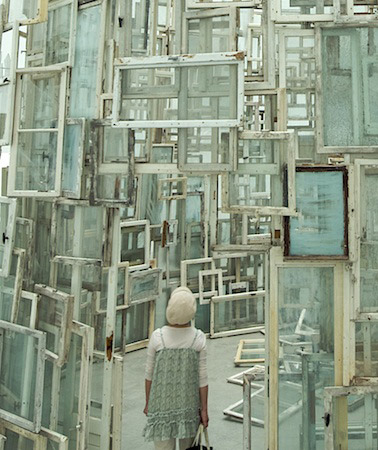 Haunch of Venison is pleased to present a solo exhibition by Japanese performance and installation artist Chiharu Shiota from May 17th through June 16th, with a reception for the artist on May 17th from 6 to 8pm. The exhibition will include one of Shiota’s large-scale window installations, made entirely of found window frames from East Berlin. Also on view will be some of Shiota’s smaller “boxed” thread works, encapsulating personal found objects in webs of black thread. Shiota’s exhibition will run concurrently at the gallery with Project Room by Marlène Mocquet.

The new window installation, a series being shown in New York for the first time, continues a theme that the artist has been exploring for several years. Though Shiota’s heritage is Japanese, Berlin has become her creative home, and it is unquestionably an inextricable part of her process. In her series of installations made entirely from window frames found in East Berlin, stacked to form various architectural structures, Shiota investigates physical and spatial perception while harking back to a very different reality in the city’s history. The windows, salvaged from demolition sites, deserted buildings etc. are layered and combined to create hollow structures lit from within. These windows are ingrained with the memories of those who used to look through them, and are heavy with meaning of what came before. The structure at Haunch of Venison will have an entrance, inviting the viewer to enter the structure to experience it from all perspectives.

Chiharu Shiota’s is best known for her monumental yet delicate installations, which evoke an eerie, melancholic feeling of both stillness and ritual. The intricacy of her thread work paired with the macabre nostalgia inherent in the found, used personal objects—from windows to shoes to burnt out pianos—recall what the artist has defined as the essence of her practice: “presence in the midst of absence.” Themes of remembrance and oblivion, childhood and memory, and emotional instability and anxiety resonate throughout Shiota’s work.

Chiharu Shiota (b.1972) was born in Osaka, Japan. She received her artistic education in Japan, Australia and Germany. Upon completion of her studies at the Universität der Künste, she stayed to live and work in Berlin. Recent solo and group exhibitions include Hayward Gallery, London (2009), Louisiana Museum of Modern Art (2009), Moscow Biennale (2009), National Museum of Art, Osaka (2008), 21st Century Museum of Contemporary Art, Kanazawa (2008 and 2009) and Neue Nationalgalerie, Berlin (2006). Shiota is also working as a Stage Designer. Her work is included in the collections of Museum für Neue Kunst, Freiburg, The National Museum of Modern Art, Tokyo, KIASMA, Helsinki, 21st Century Museum of Contemporary Art, Kanazawa, and The National Museum of Art, Osaka.