The Wonderful Land of Art. The Ethics and Aesthetics of the Nation
and
Tim Rollins & K.O.S. –
On Transfiguration 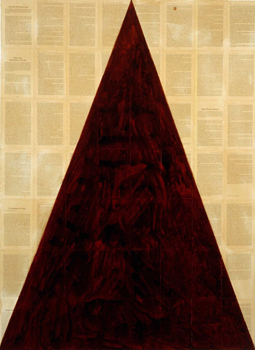 THE WONDERFUL LAND OF ART. The Ethics and Aesthetics of the Nation
28 September 2011–19 February 2012

Italy’s image around the world in the variety of its visual expressions—from cinema to art, literature, design, and both the élite and pop culture—will be viewed through 200 works by great Italian and international artists from the 19th century to nowadays.

Curated by Giacinto Di Pietrantonio and Maria Cristina Rodeschini, the exhibition has been staged to celebrate the 150th anniversary of the Unification of Italy, and will demonstrate the decisive influence of artistic creation on the practical organization of the country’s social life, above all in the past century and a half of history. The Wonderful Land of Art will thus offer significant historical examples, such as the portraits of 200 Garibaldians who took part in the Expedition of the Thousand, or a series of caricatures of members of the Italian Parliament, sketched by Senator Tecchio on parliamentary letterhead in the late 19th century.

In these works, memory captured by art is reflected as the convergence of past and present in ethics and aesthetics, in related fields such as architecture and design as well as very different ones such as the local landscape, religion and politics.

Each room will also showcase objects—votive offerings, sports trophies or books become icons of the Italian identity. Indeed, their presence will establish a comparison between the pure ideal of avant-garde art and the testimony of spontaneous, popular or industrial creativity.

Through 8 sections, at GAMeC visitors will have the chance to explore the places and moments that were part of the origin and construction of the nation-state as a united entity—the flag, the language, the national anthem, borders, the map, the religious culture, monuments and sports—also through works that mimic or define forms of political, aesthetic, geographical or identity-related representation. Through them, the exhibition moves beyond the limitation of the artistic object to engage directly with reality and its structures, with examples such as Giacinto Facchetti’s football jersey, biking champion Felice Gimondi’s pink jersey, the European Ski Cup and the uniform of Fausto Radici’s Valanga Azzurra, the alpine ski team.

All of this will be supplemented by a video-documentary, expressly realized for the occasion, which will illustrate the cultural, social and artistic panorama evoked by the exhibition, using film clips, television shows, theatre, ads and news bulletins.

GAMeC is presenting the first solo show of Tim Rollins & K.O.S. (Kids of Survival) to be held at an Italian museum.

Curated by Alessandro Rabottini and staged in collaboration with the Museum für Gegenwartskunst in Basel, which will host the show starting on 21 January 2012, the exhibition presents a selection of works offering a broad overview of the research that Tim Rollins has conducted since 1982, on art as a form of collaboration and individual creativity as an agent of social change.

The art of Tim Rollins and K.O.S. is a poetic tribute to sharing, but it is also a political appeal to individual potential. It blends the sense of measure of the classical culture with the exuberance of the street culture, the search for beauty with the expression of rage, and the tradition of painting with the power of the word as an instrument of denunciation.

In the work of Tim Rollins and K.O.S. the concept of “transfiguration” is at once conceptual and symbolic—related to the individual identity—and strictly inherent in the materials and processes used for painting, which sometimes become performance. The exhibition is thus a cross-section of their work interpreted through knowledge as a means of individual and collective transformation.

‘On Transfiguration’ features recent works inspired by the Latin philosophical conversations of Giordano Bruno on the infinite possibilities of matter, as well as a selection of works from different periods originating from reflections on texts such as Collodi’s Pinocchio, Shakespeare’s A Midsummer Night’s Dream and Macbeth and Kafka’s America.

In addition to the works inspired by Bruno’s writings, there will also be a new series on paper, created in Bergamo during a workshop that the American artist led with several students from the G. Natta High School of the Applies Sciences, thus emphasizing that his entire oeuvre is based on the principles of education and collaboration.

The exhibition catalogue, published by JRP I Ringier and completed in collaboration with the Museum für Gegenwartskunst in Basel and the Fondazione Galleria Civica in Trento, will be put out in 2012. It will contain critical essays by Nicholas Cullinan, Curator at the Tate Modern in London, and Suzanne Hudson, Associate Professor of Art History at the Center for the Study of Modern Art at the Phillips Collection in Washington, D.C., and a conversation between Tim Rollins, Alessandro Rabottini, Nikola Dietrich, Curator of the Museum für Gegenwartskunst in Basel, and Andrea Viliani, Director of the Fondazione Galleria Civica in Trento, which will host a workshop led by the artist at the end of January 2012.

The publication will be conceived as a guide to the work of Tim Rollins and K.O.S., analysing the group’s artistic method from its formation through today. The objective is to set up an index that groups all the books on which the group has worked: each one will be discussed based on the reasons it was selected, with images of the works inspired by the study of the texts.

New book by one of the "new talent" discoveries at Houston...