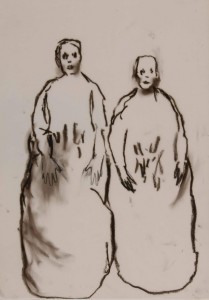 Frith Street Gallery is delighted to announce an exhibition of sculpture and works on Paper by Juan Muñoz.

Juan Muñoz (1953 -2001) came to international prominence in the mid-1980s with sculptural installations that placed the figure in architectural environments. He described himself as a storyteller, and often arranged his figures and objects in carefully staged configurations that hint at unsettling and ambiguous scenarios. The way that the viewer encounters a work of art was important to Muñoz. He was fascinated by the tension between the illusory and the real, using tricks of scale and perspective to choreograph the viewer’s experience.

This exhibition, co-curated by Jane Hamlyn and writer and critic Adrian Searle, features several important figurative sculptures which were originally intended to be part of Muñoz’s celebrated installation Double Bind (2001) at Tate Modern. In Double Bind Muñoz created a work that dramatically altered Tate’s Turbine Hall. Passenger lifts rose and fell through the spaces created by Muñoz; figures looked down from inaccessible rooms while pools of artificial light and trompe l’oeil shafts added to the unsettling and filmic atmosphere. This, the artist’s last major work, presented the viewer with a series of scenarios which played on perspective and illusion, visibility and invisibility. Though the sculptures on show at Frith Street Gallery were never shown in Double Bind they have the same intriguing character; slightly smaller than life-size their expressions and actions remain unclear as if engaged in their own private dramas.

Also on show are a number of rarely seen drawings and prints. These include a series of figure studies made between 1991 and 1996 as well as highly atmospheric images of dark domestic interiors from the Mobilario Series. These works illustrate the importance of drawing in Muñoz’s practice.

The Bakersfield Museum of Art to show "Bay Area Figuration"