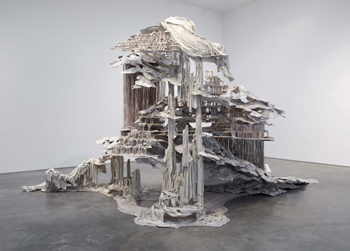 Weatherspoon Art Museum at
the University of North Carolina
at Greensboro

The Weatherspoon Art Museum at the University of North Carolina at Greensboro is pleased to present a major solo exhibition, Diana Al-Hadid, from February 9 to May 5, 2013. The exhibition highlights the artist’s unique exploration of art historical references to examine sculptural and pictorial space.

Born in Syria and raised in Ohio, the artist’s haunting works convey a world turned upside down. Her recent large-scale gypsum and metal sculptures, small bronzes, and drawings are inspired by myriad sources, including Italian and Northern Renaissance painting, Gothic architecture, and Hellenistic sculpture. Known for her innovative methods that extend pictorial devices used to convey perspective into three-dimensional space, her works tread on new terrain for contemporary sculpture at the same time as they recover influential visual histories. The exhibition represents the artist’s first museum survey in the U.S. and the publication will be the artist’s first monograph.

The exhibition is organized by Xandra Eden, Curator of Exhibitions, and will be accompanied by a catalogue published by Hatje Cantz featuring essays by Eden and art critic Gregory Volk. The project is made possible through the support of the Andy Warhol Foundation for the Visual Arts, the Elizabeth Firestone Graham Foundation, and ART\Islam, a project of the Thomas S. Kenan Institute for the Arts at the UNC School of the Arts.