Tickets are available at the programs. Reservations strongly recommended.
All programs begin at 6:30 pm. 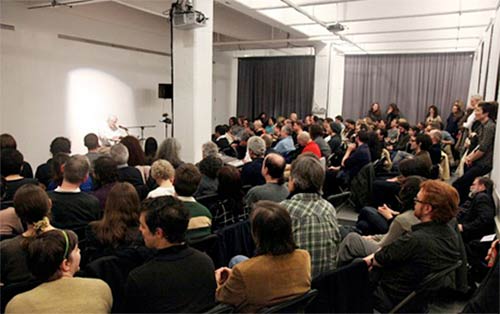 For more information on public programs at Dia:Chelsea, click here.

Dia Art Foundation
A nonprofit institution founded in 1974, Dia Art Foundation is renowned for initiating, supporting, presenting, and preserving art projects. Dia:Beacon, Riggio Galleries, opened in May 2003 in Beacon, New York, on the banks of the Hudson River as the home for Dia’s distinguished collection of art from the 1960s to the present. The museum, which occupies a former Nabisco printing factory, features major installations of works by a focused group of some of the most significant artists of the last half century, as well as special exhibitions, new commissions, and diverse public and education programs. Dia:Chelsea is located on West 22nd Street in the heart of New York City’s gallery district which it helped pioneer. Currently open for artist lectures and readings, Dia is developing plans to expand its presence in Chelsea.