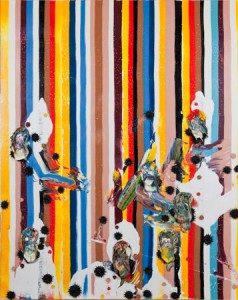 Michael Kohn Gallery is pleased to present an exhibition of new and recent paintings by Los Angeles-based artist, Dennis Hollingsworth. At the heart of Hollingsworth’s practice is a rigorous fidelity to the dichotomous nature of painting. Simultaneously materialist and conceptual, abstract and figurative, textual and painterly, Hollingsworth makes us question the étre of painting in the way Donald Judd did with the object.

Structure plays an integral role in these luxuriously rich, dense works, allowing the painting to take on a sculptural identity. Paint is dropped, both marbled and monochrome, and scraped up with scrapers and drywall knives. Tools are invented in order to achieve intended effects, such as daubers made of balled up knit fabric (which delivers flower-like forms which he then rocks into a bed of paint) or origami-like pincers that he uses to pull the spines off the monads. Spatulas and various knives are used in abundance. Brushes are cut and thinned into specific shapes and rarely does he rely on them as they are sold in stores.

Re-working the identity of painting, Hollingsworth presents the viewer with an existential conundrum that demands an awareness and a re-shaping of our own process of seeing. First you are asked to confront the sheer physicality of the work, which repositions the painting as a sculptural object and then back again, a never-ending balancing act between two different practices. Slowly the conceptual underpinnings and gestalt effect take hold as forms emerge and disappear, demanding a unique and powerful engagement with the work.