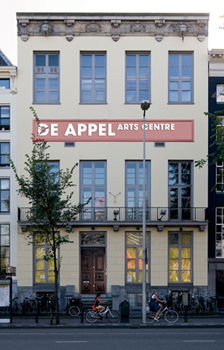 De Appel arts centre is opening its new permanent premises in a renovated eighteenth-century building on the Prins Hendrikkade 142, a stone’s throw from Amsterdam Central Station on Thursday 24 May 2012. Its new home, renovated by denieuwegeneratie and ADP architects, will not only house impressive exhibition spaces and educational spaces for the Curatorial and Gallerist Programmes, but will include a publicly accessible archive and library (comprising 10,000 volumes), a silent garden and the Moes Restaurant (*) in the basement. From 25 May onwards the building will be accessible to the audience during the new opening times, Tuesday to Saturday, 12am to 8pm and Sunday 12am to 6pm.

The inaugural exhibition in the new premises departs from the “metaphor of reversal” which underpins the traditional European carnival festival. In addition to being a period of excess before the austerity of Lent, carnival is a time that we can define as a time of “sanctioned disobedience” and in which the world is temporarily turned upside down. Power relationships are subverted, the existing balance of codes of conduct and values is thrown overboard and satire reigns supreme. Socio-political commentary and criticism go hand-in-hand with an exuberant party atmosphere. The exhibitions explores what the Russian philosopher Michael Bahktin calls the “utopian potential’ of carnival. Carnival, in its blending of ideology and ecstasy, seems to be an ode to different forms of festive critique that currently re-appear in other forms during moments of collective protest, such as Occupy. Everything and everyone temporarily assumes a different identity, everyday reality is seen from a different perspective. While according to the cultural historian Herman Pleij, carnival nowadays “appears to support the trend for regionalism and small-scale events in people’s own communities,” contemporary art creates an arena for experimentation—a temporary upside-down world—and the aim to achieve a new order.

Within ‘Topsy Turvy’ a range of artists—from the nineteenth-century painter James Ensor and the V-for-Vendetta illustrator David Lloyd, to the artists Matthew Barney, Toshi Takeuchi, Melanie Gilligan, and Markus Selg—present films, installations, paintings and performances, using the principle of inversion in order to liberate reality from the constraints of convention.

The exhibition is accompanied by a new issue of de Appel journal of the ‘Shadowfiles’ – Metamorphose – and the Dutch art magazine Mr Motley is launching an issue dedicated to the ‘ecstasy’ connected to Carnival. Artist Allard van Hoorn is creating a huge, site-specific installation in the central hall of the new building, which will be on view for a year and is connected to the opening week. Theatre director Eric de Vroedt and the Asko|Schönberg ensemble are organising a series of satirical musical performances entitled “I want my money back”, which will tour the city in a double decker bus and present a critique of the individualist consumerism that determines the social climate in the Netherlands. An supplementary programme will be announced on our website next month.

Ralph Rugoff Will Be the Curator of 58th Venice Biennale in...