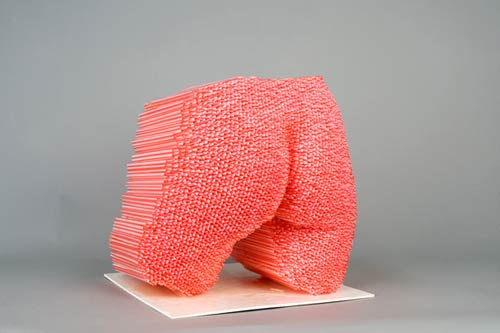 The Austrian Cultural Forum New York and MUSA Vienna are proud to present Beauty Contest, an upcoming exhibition featuring works by 20 internationally acclaimed and emerging artists who critically reflect on contemporary global society’s obsession and fascination with physical appearance. Beauty Contest opens on September 20, 2011 and will be on view until January 3, 2012 at the Austrian Cultural Forum New York. The exhibition will then travel to Vienna in February 2012 where it will be shown in the galleries of MUSA Vienna.

Beauty Contest deals with one of the most trivial everyday experiences: the daily encounter with human beauty and its social construction. A perennial anthropologic subject dating back to the writings of ancient Greek philosophers, the exhibition will present critical viewpoints of some of the most antiquated notions of universal beauty. Evidence from the sexual revolution and feminism, as well as the gay, lesbian and transgender movements have eroded clear definitions of who and what is beautiful—and who and what is not. Through their artworks the artists examine the emancipation of hidden structures of repression toward gender, race, and age.

The artworks, which include videos, paintings, sculptures, installations, and performance art, are drawn from the self-examination, self-perception, and self-definition of the individual artists, many of whom are influenced by female avant-garde artists such as Austrian artist Maria Lassnig and New York based Cindy Sherman.

Beauty Contest is curated by Berthold Ecker, Claude Grunitzky, and Andreas Stadler, with assistance from Natascha Boojar and Roland Fink.

A fully illustrated catalogue will be published by Passagen in February 2012.
Press images are available at acfny.org/press-room/press-images-texts/beauty-contest

A series of talks will be organized as part of the Walls and Bridges Season 3. (www.wallsandbridges.net)

A performance by artist Maria Petschnig is being organized in conjunction with Performa 11. (www.performa-arts.org)

A performance by artist Clarina Bezzola will take place on September 21st, at 6:30PM, in collaboration with Times Square Alliance. Please see acfny.org/event/clarina-bezzola-when-i-walk-alone-on-the-streets for details.

The opening will be preceded by an artist talk from 5pm to 6pm (rsvp required, please visitacfny.org/event/beauty-contest-1) The exhibition opening will include special performances by RebeccaGreenstein, Kalup Linzy, and Jakob Lena Knebl with Hans Scheirl.

MUSA (German acronym for Museum – Start-Gallery – Artothek) hosts the collection of the Cultural Department of the City of Vienna, and presents contemporary Austrian art in its 6,500 square foot exhibition space. MUSA also has a fully equipped state-of-the-art artwork storage and conservation facility on its premises. Visit www.musa.at for more information.