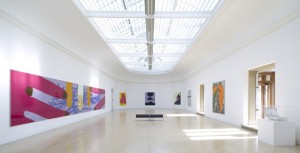 Gary Hume: Flashback is the third in the major series of monographic touring exhibitions from the Arts Council Collection. Taking as its starting point the Collection’s founding principle of supporting emerging artists through the purchase of their work; the series showcases internationally renowned British artists whose works were acquired by the Collection early on in their careers. The exhibitions combine works from the Collection with new pieces borrowed directly from the artist, giving a unique insight into the work of some of the key figures in British art. Gary Hume: Flashback follows on from the success of the previous Flashback exhibitions of the work of Bridget Riley and Anish Kapoor.

Gary Hume is one of the most important figures in contemporary British painting. Having graduated in 1988, he quickly gained international acclaim in the early 1990s with his series of bold, abstract ‘door paintings’, and he has continued to reinvent himself and confound expectations ever since. Hume was part of the now renowned Freeze exhibition in 1988, which launched a new generation in British art. He was nominated for the Turner Prize in 1996, and has represented Britain at the São Paulo and Venice Biennales in 1996 and 1999 respectively. In his catalogue essay, the writer Dave Hickey refers to Hume’s subject as ‘the suburban sublime’. Although his subjects have included birds, flowers, snowmen and babies, the work is always underpinned by an intense experience of beauty threaded with melancholy. The eroticism of paintings of cheerleaders in the American Tan series belies an acute awareness of the pervasive power of American culture.

Gary Hume: Flashback celebrates some outstanding early acquisitions of the artist’s paintings by the Arts Council Collection, including Moonbeam Rising (1994) and Four Feet in the Garden (1995), and traces a path from these early works to the present day. It brings together over 20 paintings and sculptures, including key works in British public collections such as Tate’s Water Painting (1999) and the Royal Academy of Arts’ American Tan XXVIII 1 (2008).

Caroline Douglas, Head of the Arts Council Collection said: “We are delighted to be working with Gary Hume on our next Flashback exhibition. Since first receiving critical acclaim with his ‘door’ paintings, he has created an extraordinary body of work. It is testament to both the artist’s generosity and the strength of the works acquired by Arts Council Collection that we are able to bring this substantial overview of his career to museums and galleries in the UK.”

A beautifully illustrated hardback catalogue accompanies Gary Hume: Flashback. The catalogue includes an essay by Dave Hickey, and an interview with the artist. ISBN 978-1-85332-299-0.