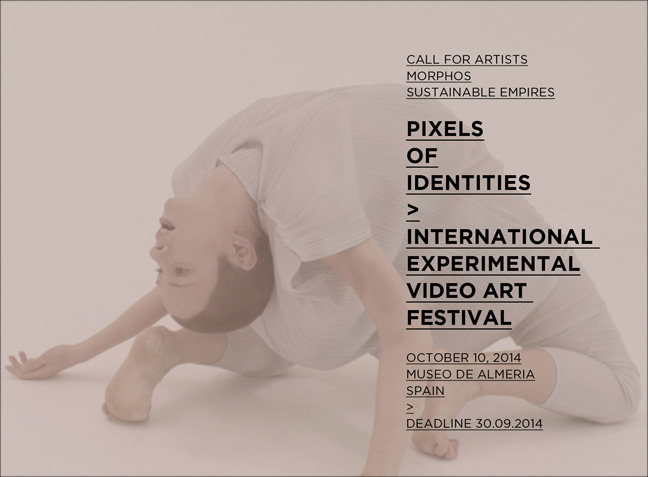 Call for Artists: Pixels of Identities – Spain
International experimental video-art festival
Deadline: September 30, 2014
International ArtExpo is selecting all interesting video/short films to include in the next 2014 exhibition:
Pixels of Identities, international experimental video-art festival which will be held in the prestigious Museo de Almeria in Almeria (Spain) on October 10, 2014 in collaboration with MECA Mediterráneo Centro Artístico.
Pixels of Identities explores all the different facets of social, physical and cultural identities of our contemporary societies. Everyday we deal with a multitude of different identities and roles: we face the public life creating and adapting our social identities; our body and aesthetic tastes modify and are modified by our physical and sexual identities; our whole being evolves as well as contemporary cultures and modern cities do. Differences create new compounds and exchange possibilities.
Artists, architects and video makers are invited to submit video art works, short movies and experimental films.
Deadline for applications is September 30, 2014
The Museum of Almería is one of the most important museums in the Almerian province. The building won two awards (PAD and ARCO) in 2004. This building was also finalist in 2005 in the Fostering Arts and Design (FAD) Awards and it in 2008 an honorable mention by the European Museum of the Year contest which took place in the European Museum Forum. MECA Mediterráneo Centro Artístico, is one of the contemporary art galleries more active and consolidated in Spain.
To take part in the selection, send your works’ submissions with a CV/biography, some still images of the video/films, links of videos/films via email to [email protected] or via mail to:
International ArtExpo
Corso Vittorio Emanuele II, 33
70122 Bari, Italy
The number of works you can submit is unlimited. The participation in the festival requires an entry fee only for selected artworks. Participation open to: artists, architects and designers, associate groups and studios.
International ArtExpo
Corso Vittorio Emanuele II, 33
70122 Bari (Italy)
+39.0805234018
+39.3387574098
[email protected]
www.lucacurci.com/artexpo

Call for applications at Hartford Art School: MFA in Photography‏